In the shadowy toy underworld, it is easy for information to get lost in the mists of time.
However, a specially-trained strike force of information gatherers is out there, trying to track down all of the secrets behind the Gi Joe and Cobra forces, and bringing them to you DECLASSIFIED.

I'm involved with this venture tangentially, so please jump over and check it out if you like Gi Joe at all.
Posted by John K. at 9:57 PM 2 comments:

It was not as if one day there were Chaos everywhere. They had always been there, working and toiling in the Glyos system. Some of them were military units, but there were military Travelers, Sincroids, Buildmen...the stories of the legendary berzerker "Formanchie Squad" were certainly no worse than the bloodbaths perpetrated by the King Crayboth on Nova Six.

But one unit of Chaos stood out from the others: the eight member Wrecker Command.

Comprised of five standard Chaos, one beast Chaos, a Govuromoid, and a Sincroid, the Wreckers were a last-ditch option to stop universal collapse. When the Gendrone uprising of 2XXX threatened the Metran government on D'Makk, the Wreckers were sent in and they accomplished their mission completely and succinctly. Fame accompanied them in their lives - such as you could call their existence 'lives'. The Metran Commanders kept the Wreckers a secret to the populace - but not to other governments and insurgents. The public face of the Metrans was Metran Pheyden and his Metras Legion; the Wreckers were the secret hammer dropped on problems that needed a blunter handling.

But there was something that the Metrans did not know about their Chaos soldiers. The event that had created the Chaos and Govuromoids was a flawed one, in some cases. The Wreckers were corrupt from day one. Their inner darkness finally came to a head during what should have been a routine rescue mission. The Sincroid, the only native to the Glyos universe, found the lead Chaos Wrecker Commander killing the hostages; he did not do so because the Metrans had wished it - but because HE wished it. The battle was on. The Sincroid killed one of the Chaos members before barely escaping with his mechanicals intact. Not that it mattered; with a corrupted Noboto sincroid, the Chaos was resurrected in a mix of chemicals, electricity, and arcane science.

Now, the "Rebel Wrecker" runs from the Wreckers, as the Wreckers blaze their own path in the universe. Little do they realize how much of a key they will in the CHAOS INVASION...
Posted by John K. at 9:30 PM No comments: 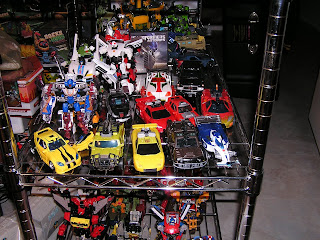 I can't bring myself to buy Aveo Swerve. Maybe someone will trade me for it.
Posted by John K. at 9:29 PM No comments: 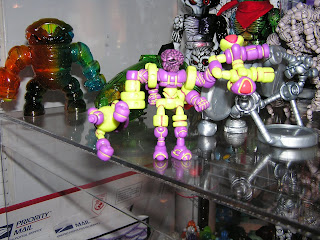 One of the great Glyos concepts is that you can build it any way you like it, with whatever story you see fit.

I had a really sweet purple Phanost head from a recent Custom Corps that had no body, which I immediately saw a home for with the release of the BattleGrip.com Buildmen.

In my take on the storyline, the Destroyator Buildmen are Old War technology that should have been completely destroyed. However, seven pieces of this technology survived, one of which is the suit that allows the wearer to control the remaining six Destroyator modules.
Phanost, in his insane quest for power to destroy the "Glyans" (who may or may not be figments of his imagination), finds the suit and rampages through the Glyos universe, begging for someone to stop him once and for all. Enter Matrix Pheyden...
Posted by John K. at 9:24 PM No comments: 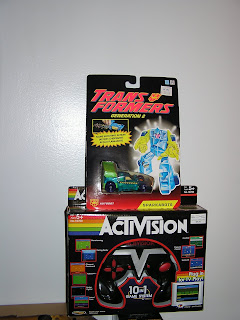 In honor of the G2 Botcon set, meet Autobot Blaze, perhaps the only Autobot "hitman" there will ever be. He is too awesome to even take out of the package.
Posted by John K. at 9:13 PM 1 comment: