If they are the answer, what is the question?*

Everybody who follows Glyos has heard of the Shadow Squad. A team of elite killers who terrorize the Glyos universe.

Now, a team has emerged that wants to take them down - THE BUILD TEAM. 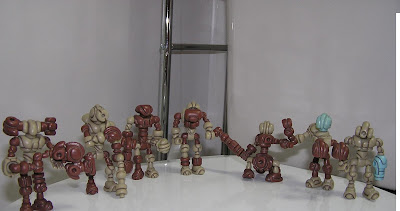 the Build Team in their antiseptic hideout. 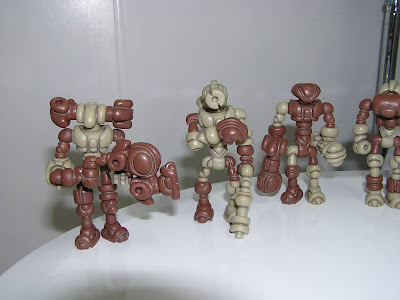 From left to right:
Hammerdead, the leader of the Build Team. He carries a Mega-BuildLaser as his primary weapon.
Pink, the enforcer of the group. One hand is a bludgeoning weapon, his other carries a BuildBlaster version one.
Wedge, the brains of the group. His head-shell conceals a Glyosian processor which can analyze billions of databytes in seconds. Carries a medium BuildBlaster and a double-hammer hand. 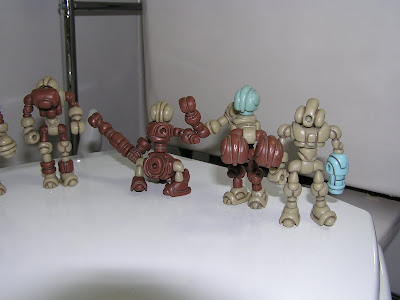 From left to right:
Brute, the silent warrior.
Skiff, the clean-up crew. Low to the ground, his back has a blaster protruding from his back, and he carries a BuildHammer.
Red, oldest of the Build Team. His arm ends in a BuildHammer, and his other arm has been converted into a smashing melee weapon.
The Prototype. Newest member of the team.

Buildman has been a lot of fun so far. You can get a lot of good looks out of them with just a couple of different figures for parts.

These versions are completely sold out - they might have been the quickest sellout in Onell history - but BRAND NEW COLORWAYS should be popping up soon in the official Glyos store. Keep your eyes peeled.