It's turned out to be quite an Exellis night, eh? Suppose that is what happens when your mind is full of Watchmen... 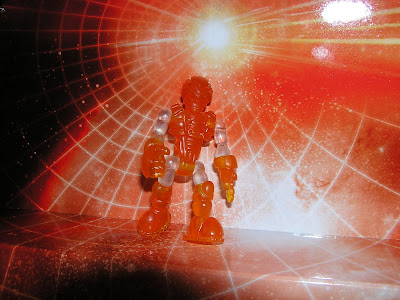 Alright, so continuing on from the previous tales:
Exellis has been freed from the possession of REDLAW, and is satisfied with the fact that he exists. With the now separate entities Hyper Exellis (who calls himself Hyper-E) and Cyber Ghost Exellis (CeeGee), they journey to the planey Pyros to regroup and plan their next move.

After being caught up in a tale of political intrigue where Exellis is almost a heroic character (but not quite, dropping a thief who nearly became the king of Pyros into an open volcano), Exellis is shown to the treasure room of the King of Pyros, free to choose whatever he likes for saving the planet from outside influence.
Inside the treasure room is an Exellis module.
Exellis tenatively touches it, a new computer program designed to stop a similar situation to Redlaw occurring again. The module begins to absorb into Exellis - but instead, forms a completely new Sincroid version before the eyes of the assembled Exellises.

This new Sincroid, Pyros Exellis, is heat-resistant, to the point where he can wade into molten lava and not be destroyed. He joins up with the other Sincroids, ready to follow the main Exellis...


Pyros is still available from Onell Design.
Posted by John K. at 11:02 PM