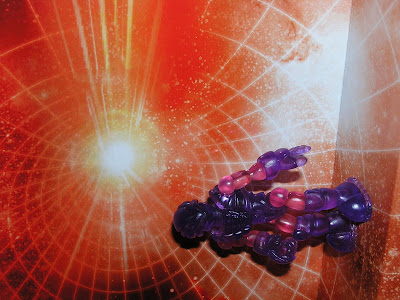 As previously related in my posts on Exellis, the journey of Exellis across the Glyos system has been in search of "modules" - Sincroid parts which, theoretically, should give some clues to the existance of Exellis, and also have the side benefit of granting him powers.

At the end of what I would consider the first or second season of Glyos tales (I like to think in batches of thirteen, although I have not thought of exactly how many episodes I would do before getting to this point), Exellis thinks that he finds the module which he has been looking for the entire time - a memory module which will unlock the secrets of his origin, where the Lost Sincroid Army has been banished to, and the creation of the Glyos system.

The module seems innocuous - a trans-purple chest module. Exellis absorbs it - and then his mind is under attack. An alien influence overwrites his mind, something from outside the Glyos system and beyond the Edge of Space. An invader from another time and place that is used to dealing with cybernetic organisms...
It is the REDLAW. Combined with Exellis and the modules Exellis has already absorbed, Redlaw can access a number of powers.

It takes the efforts of three Pheydens - Standard, Eclipse, and Andromeda - to stop the rampage of Redlaw across the Glyos universe. In the end, Redlaw is destroyed, the resultant energy splitting Exellis into eight distinct Sincroids, each based on some aspect of Exellis' personality.


Disregarding all of my storyline info, I think this is a beautiful color combination. The colors of purple and pink, transparent, really pop against each other.


Redlaw Exellis is still available through Onell Design, although Low Stock status has been assigned to this figure. Get it before it is gone 4-EVAH!
Posted by John K. at 10:37 PM