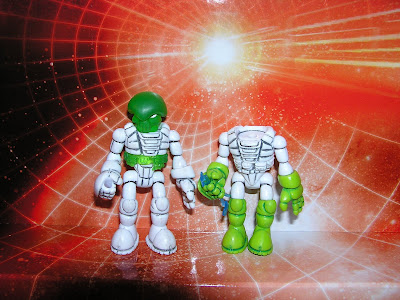 When I made this figure, the parts for an official BioPheyden were just not available.
So I did the next best thing - improvisation. Substituting the original light purple parts Onell used on their version with white parts from Eclipse Pheyden and Empire Exellis, I created this version. And then, after I obtained parts to make the actual BioPheyden, I modified the storyline to say that this is BioPheyden in an improved Flexion Suit, after he is cured from the Villser infection.
(no idea what all this means? Check out the November and December 2007 posts on the Glyos Transmission Weblog.)

I know this is an old post, but it's one that means a lot to me. My first custom, Bio-Spark Pheyden, was inspired by the original Bio Pheyden on the blog. I pictured my guy as someone who was a close friend to Bio Pheyden, who actively pursed the Villser-infected Pheyden, hoping to cure him. "Bios" carried on the legacy of his "brother," and continues to do so, acting behind the scenes to purge the Glyos system of any Villser infection.

Thanks for the comment and the story.
Bio Pheyden means a lot to me too.
In the early days of Onell, we didn't know if he was a limited edition or what.