As a film watcher, I have learned many times that there are many different types of merits to a film. Some films are well-acted. Some have brilliant special effects, or stories. A director may have a style that draws you in, or perhaps the writing is especially scintillating.

On the other hand, some movies make no sense outside of the context of their original release, being related to the time in which they were made*.

Or, you watch a film today that was made thirty years ago that was inspirational to a generation of filmmakers who pushed the original idea into new places – and the original doesn’t hold up. (see also: People who think Army of Darkness is better than Evil Dead II, when there really isn’t a comparative link between the two films other than the shared character of Ash, the Necronomicon, and the Deadites).

I had the pleasure to get, through Netflix, one of the first (chronologically-speaking) films in the Troma library, Sugar Cookies. Troma is one of the longest-lived independent film studios in the – probably the only one that has been around longer than ten years, at this point. Their genre can only be described as Tromatic – you will find no other films from a studio that have such an overriding vision of…schlock is probably not the word. A unique world-view? If there is another company that has made films about:

- lesbianism (starring a number of gyno-Americans, as Troma founder Lloyd Kaufman is fond of calling them in his essential tomes, Everything I Need to Know About Filmmaking I Learned From the Toxic Avenger and Make your Own Damn Movie!)

- sometimes heroes, sometimes cowards who are magically imbued with the power of the kabuki

then please let me know about them in the comments section.

Lloyd has a truly unique vision which imbues all of his films – along with the strange overdubbed sound effects (boing when a breast is squeezed), rapid fire editing style (I think Citizen Toxie had 3500 cuts in a less-than two hours film), and “this guy could be your brother who insisted he be allowed to act in your movie” actors, you usually get a lot of over-the-top gore and violence.

Sugar Cookies is the prototype of these films, but is somehow not diluted by the years of Troma since. 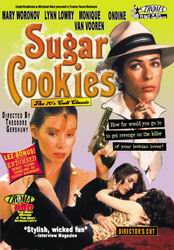 First, I must admit that Mary Woronov is an actress that I much appreciate. Her appearances in films such as TerrorVision, Death Race 2000 (the original), and Warlock are sometimes the only high point in low-budget films. She has an energy about her that is bigger than the shit films she is frequently trapped in. I would love it if we could get her into one of my films.

I was unaware she had done nude scenes, but there are a couple in the film, which was a plus.

The acting, outside of one particular police officer, was not bad.

The picture quality is not too bad for a movie from the early seventies, but it must be said that it appears the DVD was mastered from an old VHS tape, as there is some minor screen rolling at one point.

I did not find myself clock-watching, which is one of the most telling signs of watching a movie that is pretty bad.

The music is of varying quality – some of the themes wore on me by the end.

You can tell that this was very early on – some of the audio was not properly mic’d in some of the locations, as it sounds like they are in an echo chamber.

Another note from watching this and Squeeze Play, another pre-Toxie Troma film – there are a few montages where the characters are shown speaking but there is only music on the audio track. Stylistic choice or necessity of horrible audio?

I’ve found that I like a five-star rating system for films. I would give this 2.75 stars.

I can’t recommend it to anyone who is not already a fan of the Troma style, and, even if you are, not to the fair-weather ones.

You can purchase the film directly from www.troma.com

*although, amazingly, someone actually said "the ol' okey-doke" to me in a real conversation, a line which puzzled us on our initial viewings of Dawn of the Dead.