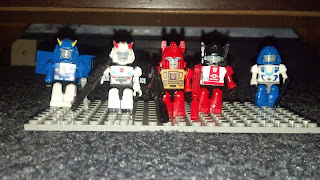 The battle of KREONS continued for some time, until Prime and Megatron had a great and powerful battle. Prime soundly defeated Megatron, and sent the captured Decepticons to Space Jail.
The Autobot KREONS happily lived on Earth with the humans afterwards...
Posted by John K. at 9:36 PM