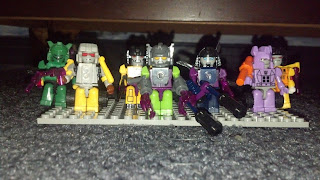 Another great leader of the Decepticons was SCORPINOK. Scorpinok was greatly interested in science. A report from Shockwave, lost in transit, reached him later. It told him about the transformation of Earth vehicles. Scorpinok thought that he could do it better.
With his group of Decepticons, Scorpinok decided to test this new transformation process on a lower-tier PREDACON warrior, WASPINATOR. The process works! A KREON, with additional parts and power, can mode shift.
Scorpinok modifies his warriors CRANKSTART, SPINISTER, SUNSTORM, and GALVATRON (from the mighty line of Megatron himself) into Micro Changers. With the yellow DEVASTATOR, he comes to Earth to wreak havoc.
Posted by John K. at 10:40 PM