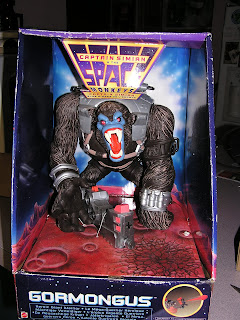 HOLY SHIT! O_O!! Where'd you find that beast?? I collected this line for a little bit, and I remember this being the one figure I really wanted to get. I like the idea of the other figures being able to ride around on top of him, sorta like a giant gorilla Battle Cat. I forget, where these hard to find or just never released in the USA?

You finally did it!

As far as I know, they were only released in the US through a magazine called GoFigure, although it is possible a "BigLots" type store got some on closeout.

I've had a standing search for them for two years here AND UK eBay, and he finally popped up the week of Christmas. This completes my Space Monkeys line.

oh i need Gormongous! how much were u able to score him for?