Not every 80s line was super cool.

Kenner was the house of Star Wars. Sure, they had Bionic Man as their first hit, but after that, it was Star Wars.
Once Star Wars was done, what was the next Kenner hit going to be?

Kenner was famous for licensed lines. Outside of Star Wars, they did Super Powers, ALIENS, Beetlejuice, Jurassic Park, Bill and Ted...but they would also take chances on concept-based lines. M.A.S.K. was one of the bigger hits. One of the lesser entries was called Sky Commanders. 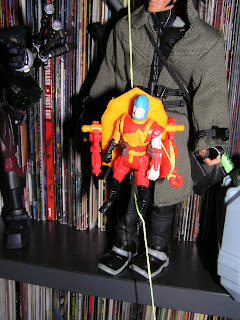 It took me a while to find an eBay auction for this one - Ascender with Jack Reily - because I didn't know the name of it.
The concept was simple - a super earthquake happened, making a new continent rich with a new element people wanted, so good fought evil for it etc etc etc.
Now, this continent was one that you couldn't walk on due to dangerous steam and probably lava (as well as animals mutated by the new element), so the good guys and bad guys had all of these machines that could move around on laser beams or something.
The lasers were represented by string, so you were supposed to make these lines all over your room and then have the figures all over the place.
It only went one year, with a second series shown in the Kenner catalog for 1988.

Where are the people begging for Sky Commanders to come back? There just aren't any.
Sky Commanders is the perfect example of something that they tried to see how it worked. And it didn't, so it went away.
Maybe we'll see one of these guys as part of Unit:E.
Still, you can get a few minutes of fun making this guy go up and down on his string line...

Fun fact - this backpack was later used for a Batman figure in the Dark Knight Collection!
Posted by John K. at 1:13 PM

I still argue that this line is a cool concept with really crappy execution. I really wish the M.A.S.K.-scale lines caught on more than they did. I still like the look of the figures and the vehicles, and my hope is that I can wrangle up a few spare pieces of wood and create a display with them that doesn't take up half a bedroom.

I used to look at Kenner's old Action Toy Guides with these toys in it all the time, in early 2001 I think I finally bought my 1st ones off of eBay MIB. I agree with you Ben in that it was a cool concept but needed work. Like Doc's said in the past, couldn't this whole line just been boiled down to 1 figure with the gimick instead of an entire line of it?

Still, they can be fun to play LoL.

What is it about the MASK scale that doesn't grab people as much?
I think that the lack of detail in some areas is a turn-off, but at the same time, is it that the supporting vehicles weren't strong enough to justify using the smaller scale?

People today still love Gi Joe vehicles - they are iconic. MASK has a small devoted following. Would Joe be as successful in a smaller scale? Our only proof is the failed Sigma Six Mission Scale line (failed based on the clearance level in my hood).

I think that people say they love vehicles, but the market doesn't bear out that fact. The percentage of people who would want a Batman and Robin in a smaller scale with a Batmobile pales to the people who just want a nice six-inch figure.

It always takes more room to display vehicles than it does to display figures, so I think you have to be pretty serious about collecting a line that is vehicle-heavy to make that investment in terms of space.

I do think the lack of detail on the figures is a turn-off. There is no way I'd be collecting just the figures for Dino-Riders. I like Sky Commanders as figures because they're a little more colorful, but again, they're much more interesting when coupled with vehicles.

I think it just goes to show how many casual collectors there are or collectors who don't have a lot of display space.