In the official Glyos comic "Reflex", we were shown the interior training facility of the Glyanauts, and how they were trained on Rigs by the Scar Command Pheyden.

I really enjoyed the comic, and had to build a number of Glyanauts and the Scar Command and his assistants.
But a question came up - where to display them?

I haven't been to a flea market in years. Can't say how many...it was just something I grew out of. I have a lot of other things to do with my time on a Sunday morning, honestly. The guys who love flea markets get out there and really pound the street to find bargains. I don't have the killer instinct to do it any more.

But, for a recent wedding anniversary, we took a fun day out and went to the flea market just to have some fun.
Of course, five seconds in, I find the below monstrosity... 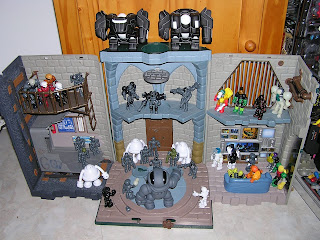 I have pretty good recollection of toys over the years - but I see the above and I'm like, "when the hell did they make that?"
Well, I didn't follow the Ninja Turtles line from the 2000s that close. I was looking at all of the figures (did Quarry ever get released? I can probably look it up), but vehicles and such passed me by a bit.
All I see is this big mess of green brick, and a bunch of pieces.
I slowly figure out what it is, and have that strange feeling that is so rare to a collector in my position: I feel like I am discovering something, mostly because I didn't know about it before.

I'm naturally thinking like a collector - this thing is going to be $80 and I'll have to pass.
The seller asks for (after a great amount of thought) eight dollars, so there is no way I'm going to be able to pass it up.

So I got it home and thought about what the set should be used for - and there you go - Glyaxia Training Command. 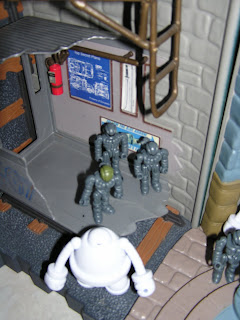 Playsets are generally crappy, when looked at with adult eyes. It's just a massive piece of plastic, most of the details aren't painted (those cost money), you get two or three inches with which to stand your He-Man and your Dontallo - but better than making a cardboard box playset, right?

This one has a lot of detail. 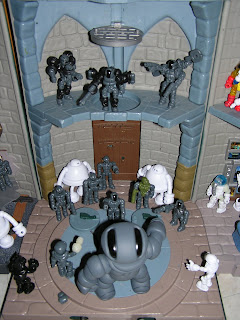 The way I see the set is that you have the main training floor - like the Danger Room, to put it in layman's terms. Here, the newly outfitted Glyans have their training against drone Armodocs, as well as a dangerous white Sincroids and black Govurom clones! And a Sarvos.
There's also something flying around that the Axis Armored Glyans are fighting, but it is just out of our sight. 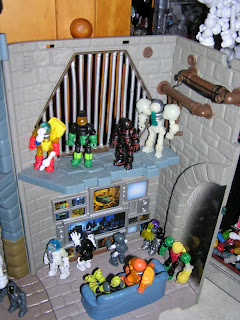 To the right of the training are, the Glyanauts watch the progress.
There are, of course, force fields protecting them from random phase arm fire.
The Sarvos assistants to Command Scar monitor the progress on their screens, evaluating the performance of each Glyan. 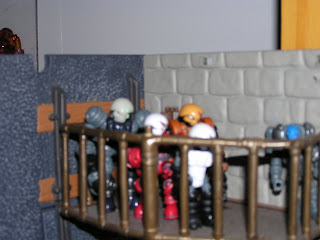 Spy cameras captured Command Scar and some of the high-level Pheydens watching the training. It was expected, by Glyaxia Command, that each of them would have a support team of Glyans. Gearius was leery to do so, as he had experienced bad things previously when assigned a full team of support personnel. White Skull saw it as an opportunity to have more firepower on his squad. And Hades...remained silent, being watched intensely by the other entity on the observation deck. 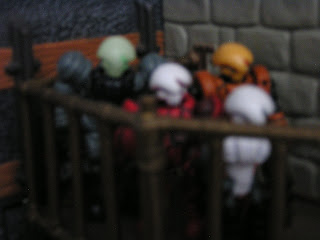 Glyaxia Command knew that something was disrupting their spy cameras, as no clear shot could be taken of the Travelers together. Was it Hades and his rebellious nature? A natural protection of the rocks the training center was made from? Who could say.
Labels: glyanaut Glyos tmnt toys

WolverineBurger said…
Quarry did in fact come out, but she was very short packed and disappeared like instantly. Fetches a pretty good price online, more than any other from that series and actually a good deal more than many of the vintage TMNT.
November 22, 2011 at 4:29 PM

Joel said…
Hi, I came across your site and wasn’t able to get an email address to contact you. Would you please consider adding a link to my website on your page. Please email me.