One of the current storylines in Glyos is the Gendrone Revolution.

Argen has broken free of his Infiltraitor programming and is journeying the cosmos looking for answers.
He finds a sect of Gobons who have gone RENEGADE, and are quietly living out in the deep sectors of space.
The Renegades try to convince Argen that he cannot trust the Glyans, and that he needs to fight back against them, but he is unsure. After accidentally killing a number of his own people, Argen is confronted by a Pheyden...and that is all we know of the story so far. At least, in comic form.

From the toys themselves, we can infer that Argen teams with the Renegades, and a new mechanical lifeform is created to fight the war with the Glyans. This entity is called the Phaseon Gendrone. 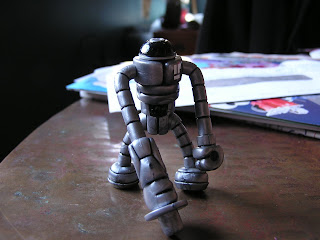 You can see a Phaseon Gendrone above - although, I have switched the arms and legs around to make this one more unique.

Personally, it took a while for me to see this as a Glyos item, because a majority of the body was previously used on something called a Beanbot.
But now I have fully accepted it and started to explore the potential that is within the figure.

In my line of thinking, experimentation occurs on the Phaseons. For instance, would it become more powerful with three independent brains operating inside one body? 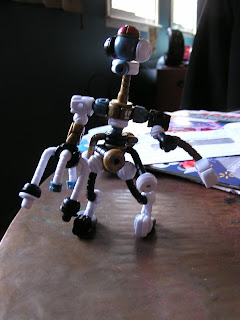 The above was the result. Three Phaseons, one body.
But the brains found that they could trigger a bodily reconfiguration for more efficient combat... 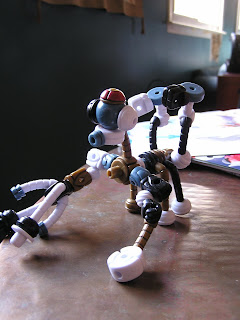 Walker mode. Which could also provide space for another Phaseon to ride. 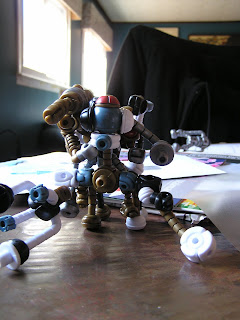 Argen was the evolution of a previous series of Gendrone. He wondered that one of his mechanical brothers and a Phaseon combined with Axis technology would produce... 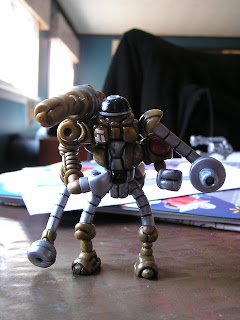 and it became a loyal soldier in his army.

Another multi-brained creation was this monstrosity. 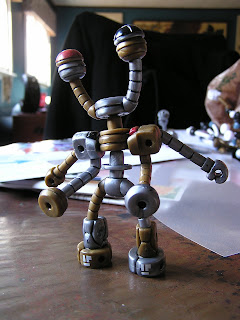 The dual brain function of this entity allows it 360 degrees of sensory input, meaning that it cannot be attacked from behind.

In my little glyos universe, the canne'boids have begun using weapons & technology and cannibalize the parts for their weapons/armor from anything they find- including some Buildmen. I find it a testament to their ruthlessness to show them wearing armor made from the bodies of buildmen; the buildman shoulder head having painted eyes off-set me initially, but now it adds to the character of my armored canne'boids as they have someone's head as a shoulder pad.

I've still not figured out a really good use for the phaseon arms & legs (aside from making Dr. Octopus-like arms, but the rest of them are great for building huge guns with. I miss the larger torso that came with the original Beanbot, although the 2 new parts are very welcome additions.