Following up on a post from the Glyos forums...
In the currently being told Glyos tales, the Gendrone Revolution has begun. War ravages the Glyos system.
Since vehicles are currently not something that Onell is putting out at a rapid clip, I have been repurposing vehicles from other lines into Glyos vehicles.

Enter a ship from the Visionaries. 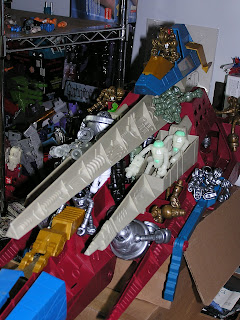 First off, when I saw this thing with modern eyes, it reminded me immediately of the Skeletor flagship from the live-action He-Man film. 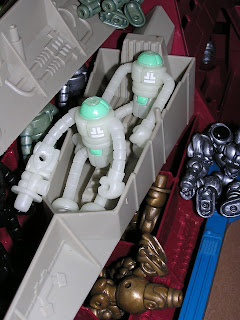 And the varied nooks and crannies of the ship reminded me a little bit of the Battle Droid carriers from Star Wars: Episode One. 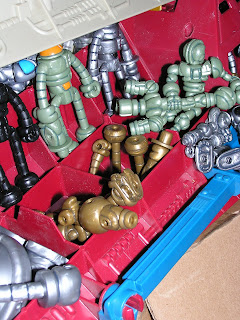 Above, one of the small ships has been removed and you can see how the Phaseons fit into the small compartments almost like they were intended to be there. 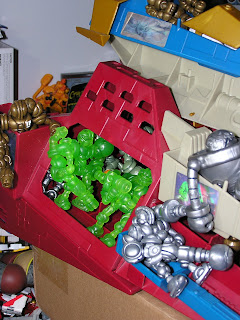 Above, notice that two of the Elite Guards of Argen (noted by their green phase coloring) are in the throne room of the ship.
Below, note one of Argen's previous forms has been adapted by one of his acolytes, who pilots the rapid attack fighter attached to the ship. 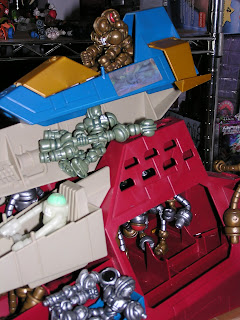 The cream of the Gendrone and Phaseon crop are granted the status and coloration of Argen himself in the Revolution. Below, note one Gendrone who carries a large Phase Trident. 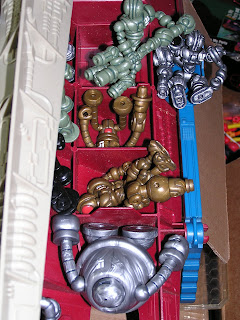 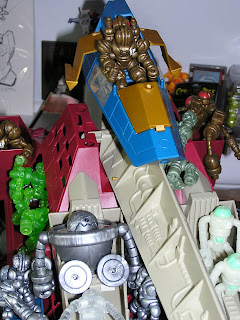 What will Glyaxia and Metran counter this ship with?
Posted by John K. at 6:49 PM

NICE! That was always a cool Visionaries vehicle. I think I have the gun that mounts atop that detachable fighter pod if you're looking for one?