Sometimes you just have to go custom.

Major Matt Mason is one of my big lines.
There is a figure in the line called Captain Lazer.
Popular urban myth says that he was a separate toyline shoehorned into MMM at the last minute.
As the figures are two completely different scales, this could be true.

Regardless of that, years later when Mattel was trying to milk Battlestar Galactica, they dug out the old Captain Lazer mold to make some figures.

I was looking on eBay a while back and saw this... 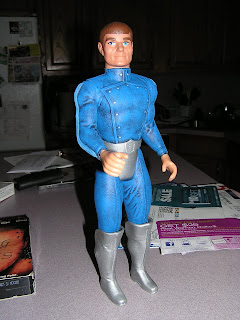 The BG version of Captain Lazer, repainted to look like the good Captain.
So I had to have it. The real Captain has a gun in his hand permanently, where this one had some retooling to be able to not have a gun in his hand.
Thanks customizers!
Posted by John K. at 4:55 PM