I haven't been buying much lately - producing a movie will do that to you!

But I did pick up a couple of things that were too good to pass up...

At the end of the Microman series, there was a soft reboot of sorts.
The Microman mythos was streamlined and every design - Pharoids, M11x, etc - came to represent one specific character.
The New Microman version of the Pharoid/16X is called Saram.

Saram was represented, as detailed at Microforever.com, as the one with the time capsule, and the leader of the new Micromen.

Saram was available in multiple colors with the time capsule.

Imagine my surprise to find this on eBay... 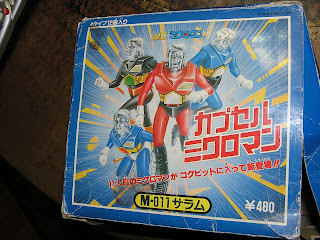 Seriously? This was released in 1983. How does an American wind up with a FULL BOX of these figures? 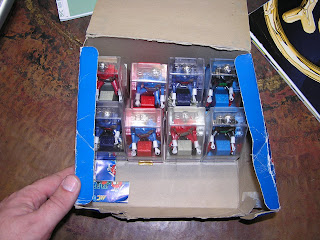 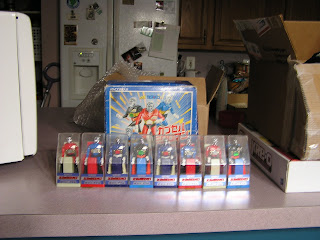 Well, it wasn't a full box - but two complete sets.

Here, you can see the four variants - mostly. My pic taking skills are lacking. 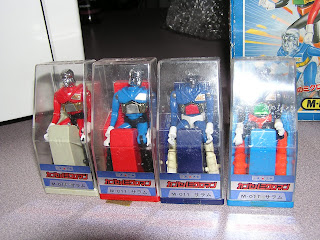 Another pic so you can see the black and red version. 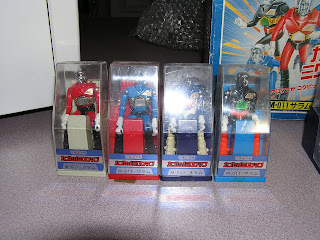 And one of the figures loose. 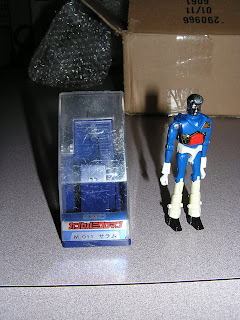 The seller related a sad story to me about a guy who owned a collectible store who passed away, left the store to another person, and then the actual seller was a third person helping out the second guy. The store was full of weird stuff (being mostly a game store), but also full of boxes and boxes of stuff from way back when that was sealed off from human eyes for years.
In one of the boxes were these Microman, and the seller thought they were actually bootlegs!

In any case, a prized addition that I could not pass up for the going rate they went for.
Someone went in halfsies on this lot with me, so the extras are spoken for, but what do you think? Is it worth doubling the price of the figure just for the unique colors and special capsule?
Leave comments!

I'd say it's worth figuring out what else is in the back stock of that store you describe!