The unquenchable thirst for old toys

So, the other day (really, about five weeks ago) I am watching TV, and a movie comes on that I have not seen in a long while - SMALL SOLDIERS.

Released in 1998, the film concerned a toy company that was bought out by a mega- conglomerate and accidentally used artificial intelligence in a new series of toys that fought each other.
It might have been one of the first movies from Dreamworks, and was directed by Joe Dante, who was the mastermind behind GREMLINS and other classics.
Can't miss, right? Wrong. It was not a success by any means.
Regardless of that, we couldn't have a movie that featured toys slip by without some figures. And Hasbro took up the gauntlet. I remember reading the Tomarts at the time and thinking "they are really giving this the mega push." If the movie was more successful, we might be still buying Small Soldiers toys on the shelves today.

But it wasn't, so we have to look at these in a historical context. 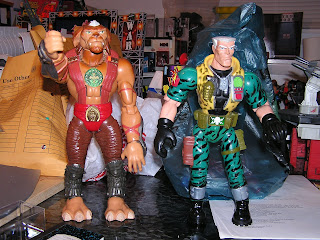 As was the trend at the time, the figures were done in multiple scales. These two, Archer and Chip Hazard, are 12 inch hard plastic figures with light and sound gimmicks (replicating some actions from the movie). They are probably the closest in design to what was actually seen onscreen, scale-wise. 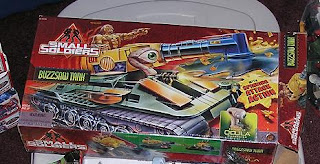 Here we have a vehicle for the Gorgons, the heroic faction in the story. In the movie, only the Commando Elite (the military figures) created and used vehicles of this type. But Hasbro was never one to let molds go to waste - this tank is mostly reused from an old GI Joe Extreme vehicle, the Thunderin' Fury, that was never released. 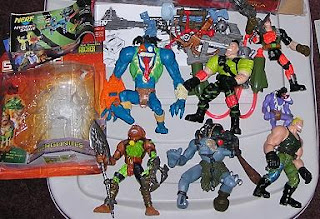 A random lot of Small Soldiers I once had in my collection. These were the standard figures - great toys. Solid construction - you could give them to a kid and not worry about him breaking them. Now, as you can see above, there was a nice variety of figures released... 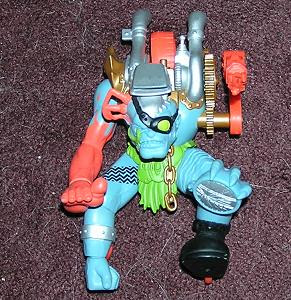 including this guy, the rare Battle Changin' Freakenstein. As was tradition, every good character had to have a refresh after a few waves. This guy snuck out right at the end of the line. I think he could turn into a motorcycle or something...the story on this guy in the film was that he was a completely different character named "Tragla Khan" (I'm not sure of the spelling) who was destroyed by the Commando Elite, and put back together by his Gorgon brothers...incorrectly, and with parts from a broken radio. 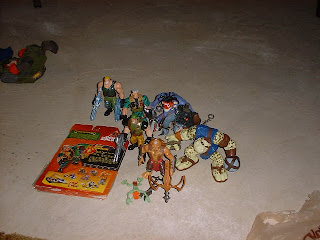 If you want to know how far we have come as a race, check out this pic. Man, old cameras had bad pixel quality! The above pic is probably from....2001-ish?
Why so many lots, you might be wondering. Small Soldiers is a line that I would get a temporary obsession with, buy a bunch, and then sell them off. I LOVE the concept, and the movie holds up pretty well - but I'm not 100% behind these toys.
One big reason - they never completed the line! There were two Commando Elite never produced - Butch Meathook and Link Static - with Kip Killigan a rare, rare find. You can kinda make him out in the pic above, maybe, if you know what he looks like.

As a collector, I look at the stuff that companies like Hot Toys are doing for Robocop, Predator, etc and I think "wow, those look awesome." but I can never pass that barrier into actually picking any up. Well, I now know what license I want them to tackle - Small Soldiers. Maybe it is time for the property to be done some full justice.
Posted by John K. at 9:54 PM