Just say no to blind boxes 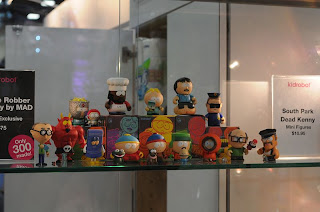 I am a big South Park fan.

Rarely a day goes by where I am not quoting South Park or making jokes about it.
So, in the run-up to SDCC this year, I hear that Kidrobot has the license for South Park.
Which is good - I could always use a few new figures.
But then the bad news - BLIND BOXES.

I understand the strategy, but to quote Danny Glover, "I'm getting too old for this shit."
I see the consolidation of toys in my mind, to a point where the "hunt" aspect is just bullshit on top of bullshit. I don't want to ride to a hundred stores looking for something; I have the money to buy the overpriced second-hand seller ones online, but I don't want to do that either.
Blind-boxes are even worse - it becomes the fucking lottery. I want a Butters, I get a Kenny; I try again, Stan; 3rd try, another Kenny. Then Kyle. Then Ms Choksondik. But to get to that Butters, I have three options:
1) keep buying and trying.
2) buy one online for a price equivalent to the rarity. Cases in point: old Smallest Transformers had 1 per CARTON (like 144 figures in a carton, so that is fucking RARE), so the chase was like $150 bucks. Or chase Marvel Legends, something that many people will be familiar with.
3) buy a case that guarantees all of the figures, then spend years selling/trading the extras.

I just can't do it any more.
The lines slowly consolidate, where Transformers hangs by a thread, MOTU gives me pause because they KEEP ADDING NEW ITEMS THAT MAKE ME GO TO THEIR SHITTY WEBSITE, and Glyos is king. And I'll always have a soft spot for new Freddy and Jason figures, as long as I don't have to go to the bottom of Crystal Lake to get an exclusive.

Ask on October Toys, there is bound to be someone there that has a Butters

Sadly, I'm probably going to spring for the Street Fighter Kid Robot series. I already know that Bison is the rarest and Vega is going for around $35, so I'm okay with that...for now.