How long have you been collecting toys?

I've been in the game for a long time. I had Kenner Star Wars. The first MOTU, first Joes, first Transformers...

To the younger guys in the game - or those who have not been immersed in the rich history of the collecting realms - you might go to the overpriced collectible store on the boardwalk in Wildwood and wonder "why the hell are those McFarlane figures I don't recognize so expensive?"
Well, there is a story behind that. A story probably too long for me to get into here.
But the relevance of it to today's post concerns the figural part of this bounty that was brought to me by my good buddy Ben. 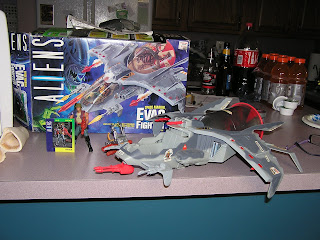 The ship? Nah, not tough to get in any temporal period. Even after the apocalypse, there will be Evac Fighters in ruined toy stores across the nations. 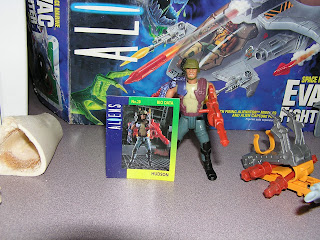 But this figure? Hudson? The EUROPEAN version? Highly uncommon.
Valuable? Not any more. But at one time...this figure would have set you back a paycheck (or at least part of one).
ALIENS is one of the most important lines to me as a collector. It was there while I was growing up. Of course, now it is highly irrelevant. McFarlane and NECA made movie-accurate figures - Hot Toys made even better ones in other scales. Even Microman licensed ALIENS.
But when we really wanted some xenomorphs in our collection, Kenner was there to provide us some fun, TOY versions that you could actually PLAY WITH.

Of course, they are based on a cartoon that never made it past the pilot stage (thanks to Alien Collection.com for the rare screencaps they dug up of the one episode created), so again - what is the relevance?
To me, they will be hard to beat unless we finally get the "grail" of ALIENS toys - full-blown 3 3/4 versions with vehicles and playsets. And I don't see that happening any time soon.
Posted by John K. at 3:14 PM