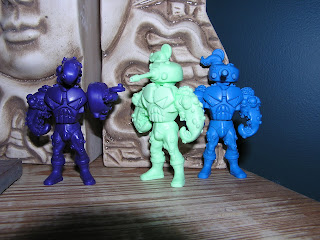 Today's update is a simple one.
One of the surprise items at SDCC was Triclops studios bringing exactly one set of the Tankopula figure variants. It was known that they would have their exclusive purple version, but not the others.
I had missed out on the previous two versions, so I saw this as the perfect opportunity to fill in some holes in the collection.
Now, I warn you - there are some issues with this figure, if you are dying to track one down. I already broke the barrel from the tank part of the purple one. The figures are actually glued together at the joints, due to issues with the holes on the figures.
Purely a display piece...
well, not for me. I ripped the arms and tank off of the purple one and combined him with a Glyan to make a super-tough Purple Punisher Nibbler. Maybe I should take pics...

Anyway, this might be the only set of all three (in their original configurations) out there. Enjoy!
Posted by John K. at 6:31 PM