(I should mention now - this is my take on the Nibbler. Some fan-fiction involved here!) 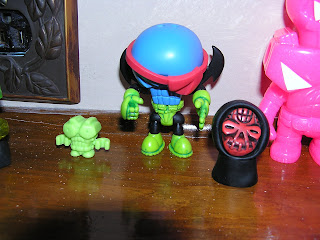 The Nibbler completed his regeneration, but his brain was expanding too rapidly! It caused his regenerated left eye to explode out, necessitating the eyepatch. The Nibbler had his minions drill holes in his head to relieve the pressure.

The Mini-Nibbler was something bizzare that escaped the regeneration machine after the Bowling Ball Nibbler was completed regenerated. It has very little of the intelligence of the true Nibbler, but six times the hunger.

The Nibbler had a nightmare that a ghost was chasing him...and ate him. But what is the Haunted Nibbler truly? A phantasm? Real? The Nibbler will find out in his darkest hour.
Posted by John K. at 4:35 PM