Glyos Holidays! with the OSM and Friends

Wow guys - this month has been Glyos heaven.
Just a lot of product out there and in the pipeline. I don't have my Renegades yet, but lots of other Glyos-based awesomeness has shown up in the lead-up to the holidays. 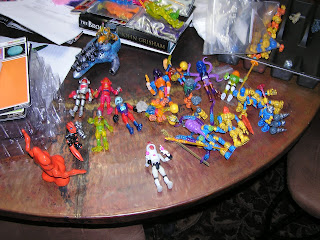 A quick snap of the table, works in progress. 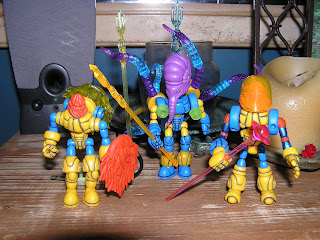 Stinkin' Doughty had to make the OSM test shots part of Glyaxia Command. Since I don't have a set of test shots, I had to use the real deals.
In my mind, the OSM wind up in the Glyos System while chasing Metamorpho, who has lost his identity due to a switch to a strand of EVIL DNA. It would be one of those classic tales where they go along for so long, trying to track down the evil one, as he escapes and eludes them. Because of the transition through the Edge of Space, they are stuck in an "Alpha" energy form, then a "Beta" form, with a quick transition into "Ceta" form before becoming their true, original selves. But then you get a twist - they are forced to work for Glyaxia Command because of Metamorpho and his tricks.
They are forced to wear the Glyaxia colors, but this also gives them additional powers. Inferno can live without his environmental helmet now, as a being of living flame. Astro Nautilus can manifest energy tentacles to help him in his sciences and hunting. And Xodiac...is keeping the powers of his new suit a secret.
I'd develop their characters while having them interact with classic Glyos concepts, but eventually they would get away from Glyaxia Command... 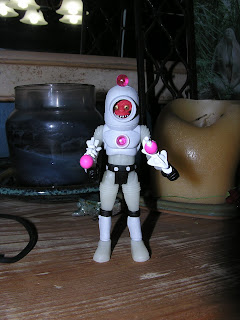 While Metamorpho becomes even more powerful. Parts of him are now completely energized as he tries to complete his goal. But the OSM will eventually catch up with him after.... 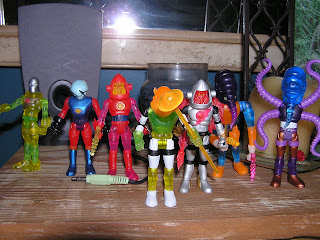 they finally find a way out of Glyaxia Command. Others from the races of Inferno and Astro Nautilus arrive through the Edge of Space, and they form an organization dedicated to fighting evil (since they can't go home). A Pheyden joins them, as well as an advanced Metal Glip.
But enough about the OSM for now. 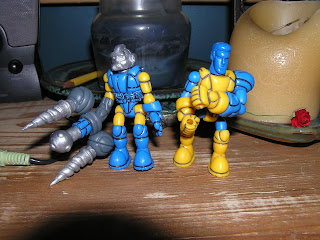 I haven't featured much on Spy Monkey's heads - not on purpose, just forgetful to do so.
Here you go! These are two of his heads, shown as Glyaxia Command members. 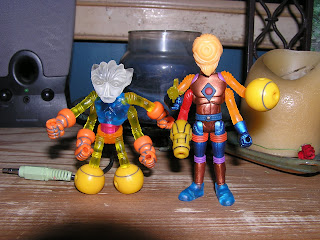 Another customizer, new to the Glyos scene, is Lady Hydra. She has used Spy Monkey to produce her heads, and this is the result. The SPORE characters, as mentioned on her thread over at the October Toys forums, are galactic opportunists. They terraform planets for real estate purposes. In my story, I see them as coming through the Edge of Space, but being mutated by the experience. They are looking for their missing friend, while trying to find planets to exploit for profit and figure out where they hell they are in space. 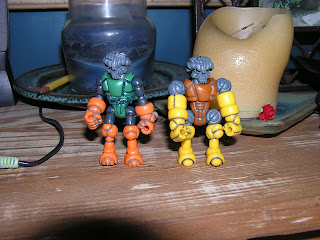 Based on Govurom's appearance in multiple Commands of the Chaos Custom Corps, I figure that he may be able to clone himself, or make clones of himself. I wanted to give him a little gang, using the grey heads from the Axis Joints preview release. These are two of the members. 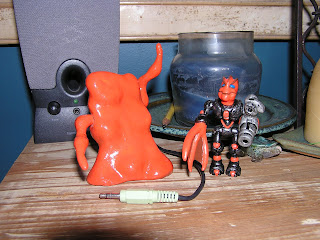 Brian Pyne, EatYourChildren on the Glyos boards, has been working on a custom Glyos figure for a while now. I had to have one when they went up for sale. This guy's name is Dae’Dal. I dig him a bunch. He'll fit in well with my other Glyos customs shelf. I gotta take a pic of that some day...
But speaking of customs.... 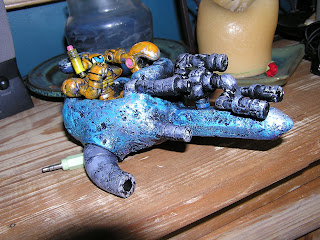 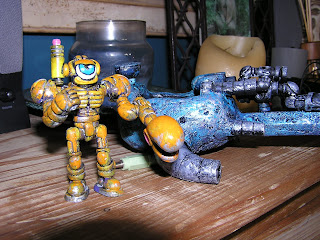 After I was massacred at the auction for Vectar in September this year (and missed out on the Old Rig because of it - long story), I said to myself "I gotta have this guy!" Luckily, I saw it come up for sale at the Munky King website and picked it up. A lot of work went into this sucker. He is a good companion piece to the Rebel Wrecker.

So, that was my Glyos weekend. Next week, I hope to see the arrival of the Holiday Edition OSM and perhaps the newest Glyos wave.
While I have a chance, I want to make sure everyone knows that the Holiday Edition OSM and the Infinity Edition (the classic, painted colors) OSM are on sale at Store Horsemen RIGHT NOW. You will find little better value for your $40 this holiday season.