Another year, another con down.
NYCC 2010 was in a different time this year than last year - last year was in...March or April? - and now seems to have settled into a home in October. This seemed, for the most part, to work well - let's face it, any con that takes place before July is going to be competing with SDCC for your buying dollars, so NYCC was seen as an easy skip for those of us on a budget. Now, it might have a spot that will work well as a post-SDCC celebration of nerdism. At least until we get one of those freakish October snowstorms that ruins the con/traps us all there...

Anyway, this year was a pretty big show. The Glyos representation was MASSIVE, to say the least, with some first-time appearances by familiar board names and many familiar faces popping by the Glyos booth. I had a great time seeing everyone and hope to see you at future conventions! There were really too many to list, so I'm not going to try and do it and then miss anyone.

But you aren't here to listen to me reminisce about deep-fried hot dogs and watching the Godbeast himself nearly get squished between two rapidly-moving New York taxi cabs. You want to know about the swag that was available!
This con was also flush with Glyos items. It seemed like everybody had something to sell under the Glyos banner. 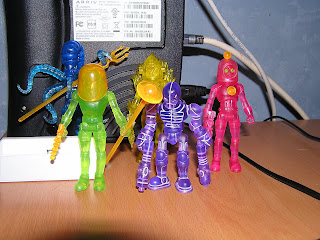 A giant draw to the con this year was the BETA versions of the Outer Space Men. Instead of the free-for-all that occurred at SDCC this year, where the ALPHA set was (mostly) sold out within two days of the con, the sets this year had a limit imposed so that resellers couldn't get their hands on too many of them. Which is good - because this is another great set from the Four Horsemen. I have a hard time picking a favorite - the colors are all so vibrant and alive.

Also shown in this pic is one of the only two new releases from Callgrim.com/Rawshark - Legacy Callgrim! He snuck into this pic to make sure these OSM upstarts weren't stealing his thunder!
The other Callgrim release, which I did not pick up, was a completely white version of Callgrim. This Callgrim can be assembled by purchasing the Hollow figure from the Callgrim.com store and reconfiguring him into Callgrim. 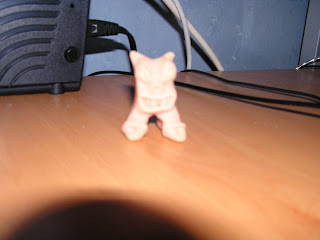 This wasn't an item that was for sale, but a gift from my good friend Bah'Glenn. It is an upsized Mordle from the classic forgotten toyline, Rocks and Bugs and Things. Thanks Bogs!
Bogs was selling his first-ever printed comic book of the Alien Mercs. I'm going to have to hit him up for another copy, because mine disappeared! 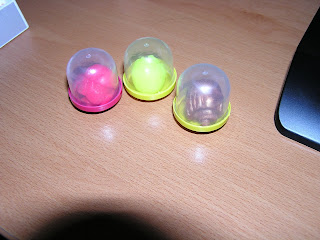 The Sucklord represented with two Glyos offerings. More Sucklord heads were available - in some never-before-seen colors - and a brand-new character, Dim Bulb. I had to leave the con early, so I don't have a pic of DB to show you, but you can find it on the Suckadelic Flickr page. 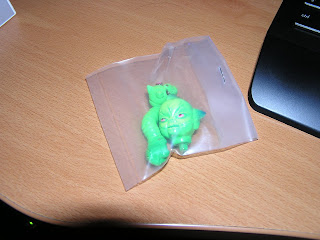 Paul Kaiju was making a rare East Coast appearance with the first-ever Glyos version of his Biter character. Nice stuff. The only shame was that there were no bodies to go with the heads. Mr. Kaiju does such great work that I wish more people could get examples of his work. 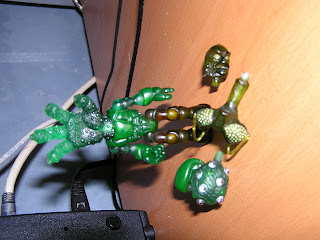 Another legend in the customizing world, the Godbeast, was at the convention with a selection of his popular Aliens/Infection/Voodoo Maggotto/Monster figures. I picked up this one because of the MUSCLE hand! How could I pass it up? Answer: I couldn't. 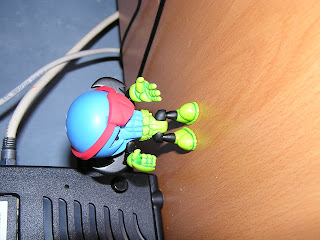 The Tarantulas continued his series of Nibbler characters with this new entry: The Bowling Ball Nibbler. I opted for the Classic colors version, since I no longer have my original Nibbler.
There are some plans in the works for the Nibbler to be a bigger part of the Glyos universe - keep your eyes peeled to the Chipfork Afrocomb blog. 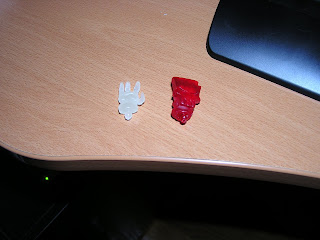 Evil Earwig popped out to the East Coast to debut his new Glyos creations. Interesting stuff - I hope we see more from him in the future. For better pics of his offerings, check out his thread over on October Toys forum in the Metran Times section. Hit him up - he may still have some for sale. 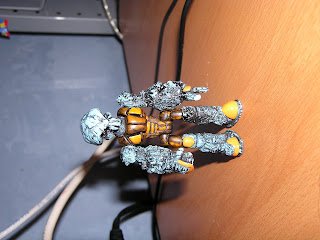 I got to meet forum member NiStuff after some long correspondence with him over the last couple of years, and to see his works up close. Some really good stuff - it was difficult to pick which one I wanted! In the end, I went with this mutated Pheyden, who I believe he said was one of Dr. Styre's experiments. Visually very different from what Matt has been doing with the line. I'll be keeping a close eye on Ni's releases from now on... 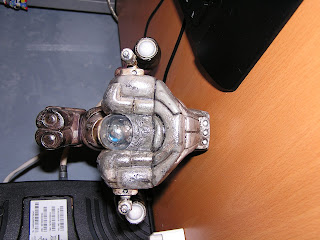 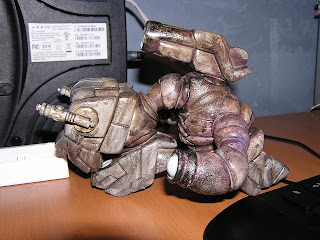 An UNEXPECTED surprise came in the form of this ship from forum member Ralph. Comprised fully of Glyos parts harnessed into an original form, I had to have it. There is even a control panel tucked into the cockpit - with a driver! 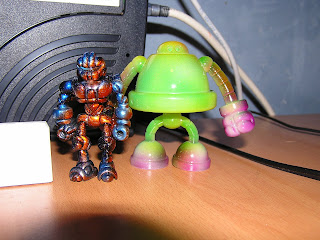 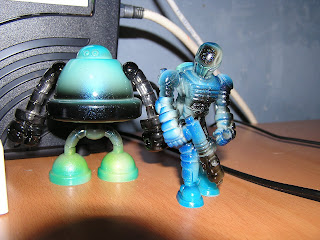 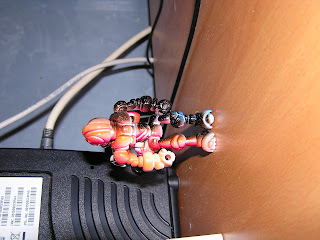 As always, I felt trepidation when I heard the magic words "Walker is coming to the show." Matt Walker, AKA Dead Presidents, always brings the A-game in his customs. I couldn't pick just one, so I picked a few... 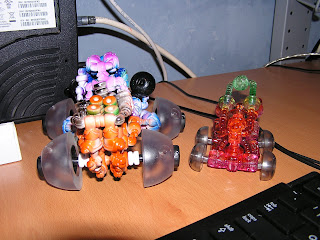 including these bad-boys. Now Pheyden has a hot rod! 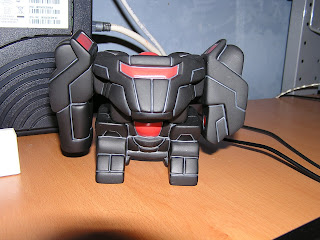 With all of the guest customizers on the table, many were wondering "what is Onell selling at this show?" The answers were "a handful of previous releases, and two new items." One of those items was a black version of the Rig. Looks sinister, eh? 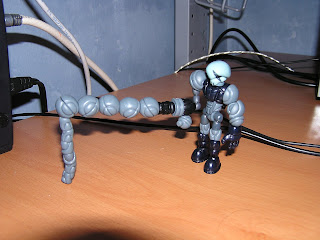 But the most important item on the Glyos table were these, the new joint system. And wow. I could tell from the number of people I saw playing with them over the weekend that they are just what we have been waiting for. The new possibilities made a reality by this joint system are much more complex than anything we could have done before.
Here, you can see something I quickly threw together - a laser stream issuing from the Phase Arm wielded by Agent Nemica. Please note that Pheyden could still stand even with the amount of parts at the end of the Phase Arm - I just put it into this configuration to make it quicker to take a pic of it.

The joints pack available at NYCC even includesd a special surprise that was reported on by con goers - a PRODUCTION LEVEL head of GOVUROM!
The release pattern for Govurom has yet to be announced, but people now know that they will be able to add this character to their collections in the near future!

I also picked up a new Mazinger Z figure from Bandai, but that is a story for another day.
Labels: chaos conventions four horsemen fun Glyos NYCC outer space men