Fun with the OSM!

My time has been limited due to projects I am working on and some personal stuff, so I haven't had much of a chance to enjoy these guys outside of their original configurations. But that has ended. 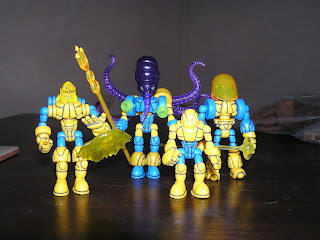 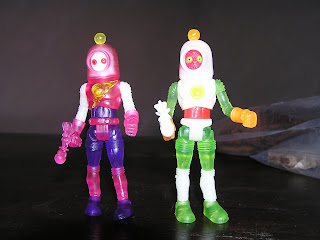 METAMORPHO. With the power to assume the head-shape of any other creature lost over time, he is stuck with only three different options to transform his features into. He must now rely on different powered suits to keep out of the grasp of the OSM. 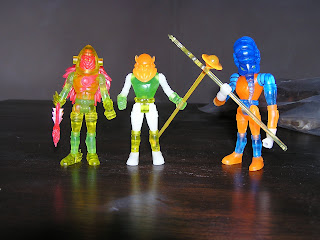 The journey to the Glyos system has not been an easy one for the OSM. Crossing the dimensional barriers through the Edge of Space transformed the OSM into beings of pure energy, with no known method for returning to the Milky Way.
They first appeared to Pheyden in "alpha" configuration, later shifting energies into a "beta" configuration. As they approach final stabilization into their original forms, another mutation occurs, the energies of both previous forms unlocking a new evolution in their energy states. 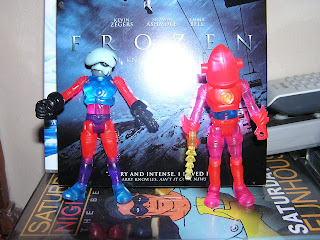 But Pheyden has been changed by meeting the OSM, taking on a new body made of the same alpha and beta energies as his new friends.
Unknown to the OSM, another being has followed them through the Edge of Space, his face hidden from view. His planet - Earth...
Labels: four horsemen Glyos osm outer space men toys