Ah, another of my favorites. 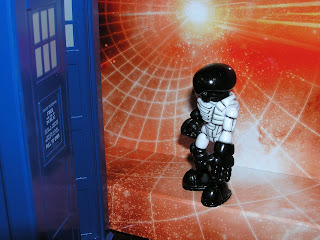 The powers of a Pheyden can be varied in many ways, depending on its origin and how it has processed the energies of the universe.
In one particular case, a Traveller was imbued with the energy of a black hole, creating one of the most powerful Pheydens of all.
Eclipse Pheyden generated in the center of a black hole, absorbing it completely and finding that, in addition to the standard Pheyden warp powers, he could generate miniature gravity wells. In addition to his powers, Eclipse wears a modified Flexion Suit, allowing him to take a great amount of damage in combat.

Over a number of years, Eclipse found himself drawn to another Pheyden - Andromeda Pheyden. It was only natural that a black hole would be attracted to a star. The two formed a partnership that lasted for many years, until their deaths battling Monstrous.

Some time after the battle with Monstrous, a star mysteriously imploded, creating a black hole. The black hole slowly coalesced into the form of a body, the energies forming something of their own accord...
Posted by John K. at 6:54 PM