The Evil that Lies Within...

Everybody has that line they obsessed over in childhood and later obtained, only to find that the toys weren't all that hot.

Inhumanoids is one of mine. 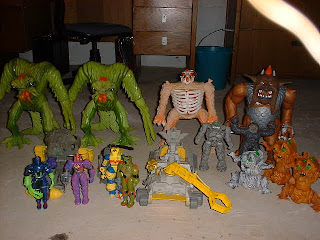 I greatly enjoyed the cartoon, and wanted to relive the adventure (on a shelf, imagining playing with them). So I picked up lots over the years and this was the end result before they were terminated.

There were just so many missed opportunities on this line. The Earth Corps should have been tied in to Gi Joe, as they technically were on the show via the presence of some Sunbow toon mainstays; the way to do this would have been a 3 3/4 figure with removable armor.
The monsters, as crazy as this sounds, should have been bigger.

My stupid nerdy dream is that Hasbro will launch something similar to Matty Collector and put out a dream Inhumanoids line. But I so know it would tank harder than anything you could imagine. Perhaps someday.
Labels: hasbro inhumanoids

eatyourchildren said…
About three years ago I remembered Inhumanoids right before falling asleep but could not remember the name of the show. This was before I got really into toys again so I didn't know where to look for info. I spent hours trying to find out the name of the show, I tihnk I finally got it when I searched lava monster toy or something. I remember the toys so much more than the show, in particular the giant sized monsters and the way they lorded over all other toys at the local shop
March 17, 2010 at 5:12 AM

Monsterforge said…
What a great toy line! They were so unsual and fun looking. D Compose was my favorite-- I have no idea how they got away with designing a rotting, open-chested, chicken-faced, fleshy funk monster, but I love them for doing it!
March 17, 2010 at 6:34 AM

Anonymous said…
I always liked the Inhumanoids show as a kid. I rememeber watching it on sunday mornings and renting the tapes from a video store up in New Hampshire. They never put out the last 4 episodes on VHS so for years I never saw them. THEN, the show got released on DVD but again never put the last 4 episodes on DVD. I finally saw them on YouTube of all places, but they were taken down shortly after I saw them. The show was great and not written TOO badly.

The toys, as you said Doc, could have been infinitely better had they done a bit more work on them. Growing up, I never had any of the Inhumanoids themselves, just Herc Armstrong (my only Earth Corps guy), Granok, Redlen & Magnacore whom I got for Christmas one year.

I vividly remember going to Toys 'R' Us with my dad & buying a Terrascout vehicle on clearence for $0.99, but when I got it home noticed it was missing a piece. We then had to go back to the store & exchange it for a new one.

I finally managed to get the majority of the toys from the line (all the Earth Corps, Inhumanoids & both vehicles) not too long ago and it's cool to finally have them. I still need a better version of Metlar, as mine was bought loose and has had some severe plastic shattering done to his hips hindering his ability to stand correctly. In time, I hope to get a MIB version of him to replace my busted one, but he works for the meantime.

Unknown said…
Hey all, I share your love for this line and hope that it will be re-launched someday. I've taken matters into my own hands though and have created custom updated versions of these characters. You can see them here: http://www.figurerealm.com/ViewCustoms.php

I purchased the updated Earth Corps from the brilliant customizing duo know as "Boskoes" and they inspired me to update the entire line. Would love to hear what you think.
April 18, 2010 at 7:43 PM

Unknown said…
Sorry that link won't take you directly to my work. hnce the page loads, Hit the "search" button on the left menu and type in "Inhumanoids" and that will bring them up.
April 18, 2010 at 7:48 PM

wow. Completely awesome customs.
Keep up the good work - Magnacore could use with a sweet update.

Thanks for the comments everybody. If I can somehow wrestle the Inhumanoids license away from whoever currently has it, I know who will get the first run of figures.
April 19, 2010 at 9:48 PM