I couldn't say what it was about the latest Passcode, but I knew immediately that I wanted an Ayosire playset.... 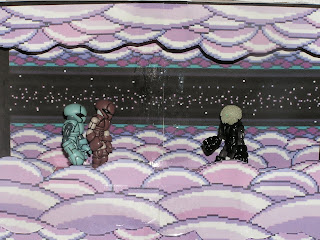 I love the Custom Corps. Not so much the idea of a limited edition figure, but the designs that were created. So, I decided that I was going to replicate the ones I wanted that I could not get.
If the appropriate parts were not available, I would sub some in. Here are some of those customs: 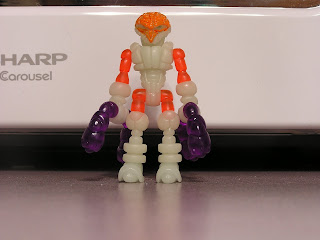 The glow guy with the face coloring! He does not have the clear coat of the original, and I subbed in purple guns to give him a different feel, but I'm happy with it. 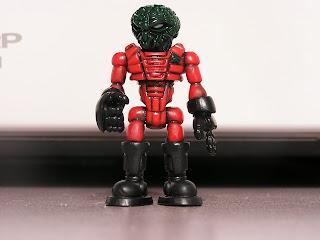 The Visitor! I skipped the pure lizardy eyes like the real Custom Corps had, and subbed in Callgrim leg parts. 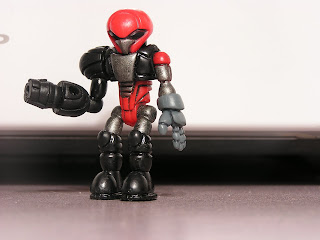 Tracker Sarvos! Loved this one, but there is no chance to the get the original, so I painted one up. It is not completely done - I have to retouch the red parts, I think. 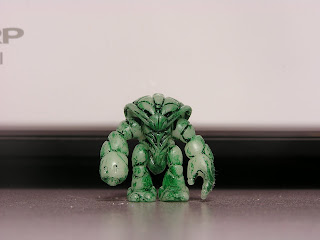 This is not from the Custom Corps - it was an experiment in adding detail lines to a Crayboth that was GITD (I saw someone on the forums had a similar idea concurrently). I imagine that he has just been tearing through the green walls of his nest, and is covered in goo. 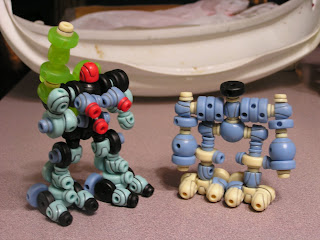 Phase Hunter and a Grim Squad Phaseguard!
I wanted to build some of the unique Phase Arm creations from the Onell blog, but my Phase Arm inventory is limited - hence the color substitutions on these guys.
The colors I used on the Phase Hunter remind me of something...can you help me identify it? Not the trans-green parts, but the rest of the colorway.
Posted by John K. at 8:49 PM 1 comment:

The Pheyden Base that I put together has been shown a few times before, but here is the current incarnation: 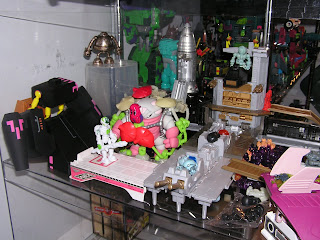 I'm always finding something new to put in here. I customized a Callgrim and made him the Keeper of the base (after the Guildmaster incident). There is now an Armodoc prison cell, with the processing of the 'Docs life signs by a SquidBot. An early Buildman prototype watches over portions of the base...a zoo of rescued Crayboth sits in subspace pockets, viewable from the rocket base deck. And a Goliath-class Protection Robot guards the master prison cell, containing the most dangerous being of all... 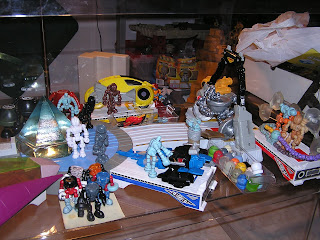 Pheyden has picked up a number of vehicles, companions, weapons, and suits in his travels. BB series Gendrones specially reprogrammed by Pheyden take care of the day-to-day functions of the base, including the Time Gate. Phase Arms and Gobon Blasters of all varieties are stored here.
(my non-story note: I almost threw out the Lex-Soar 7 on the left side of the pic. Glad I didn't - it is nicely scaled for Pheyden. I might paint it.)
Posted by John K. at 10:25 PM No comments:

I've been thinking about playsets and vehicles...

Now, not everything can be made out of Glyos parts....yet. So I wanted to have some places and rides for Pheyden and the gang. Here was one result. 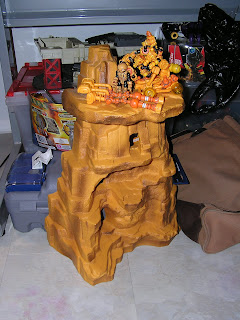 You guys remember those old Sears Christmas Wishbooks? They have been on my mind, seeing that we are damn near Christmas right now. And years ago, I picked up this mountain at a yard sale or in an eBay lot or something, and never knew what it was. But I picked up an old Wishbook and there it was, in that wasteland of toys that were inbetween the big names - where you would get bootleg/repurposed Gobot molds and weird things instead of the "four Star Wars figures in baggies in a brown mailer box" you wanted.
I thought it made a great hang-out for the original Scar Pheyden (that was made from a Gear's Edge Pheyden and featured in the early days of the Onell blog, although the first official purchasable version was the standard blue one). I customized this Scar myself - an early effort, and it would show in close-ups. I also gave him a vehicle, a four-wheeled, double-barreled machine for desert traveling.

How about you? What do you use as a Pheyden playset?
I have a couple of other repurposed sets that I intend to customize...
Posted by John K. at 9:32 PM 3 comments:

Forcing a Hand - The Supremes part 2 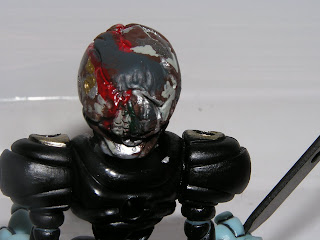 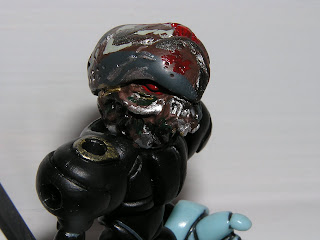 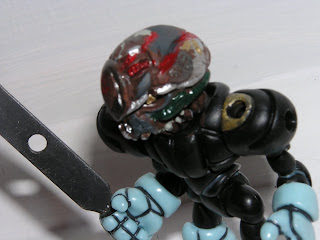 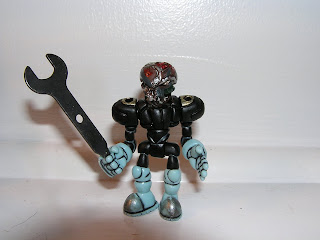 Setting up a castle

So I was going through my Army of Darkness stuff - here is a WIP pic of the new castle set-up. 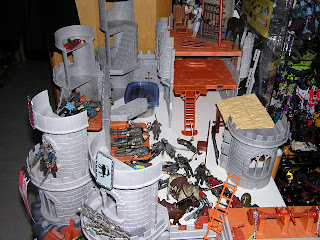 And this is something I picked up recently. Nuff said. 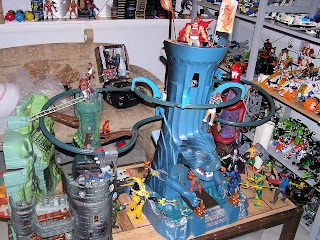 The Shadow Squad - the Grim Shadows - The Supreme

The Shadow Squad, as they came to be known, popped up in the middle of a war on Planet Four-Hundred Thirty Two (the official name stricken from the record under order of the Metran government). At first, there were only three members of the team: 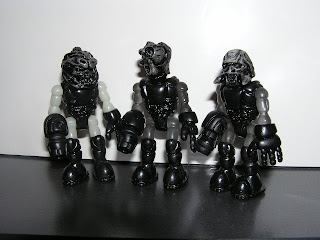 Morkoroth, Beholder, and Manticore. The Squad seemed to be fighting for its own purposes, killing combatants on both sides of the war.
The Squad was seen in the final days of the war, assassinating the leader of the Red D'lliance Army.

The next recorded appearance of the Shadow Squad concerned the hijacking of a space freighter carring liquid lavanic power from the Ballim region. A new member was sighted with the Squad, Clopos. 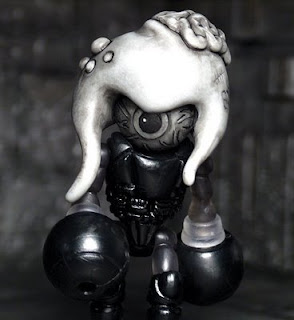 Over a number of years, the Squad showed up in a number of different places, sometimes as hired muscle for a dictator, other times as mercenaries, and in one confusing report, stealing back a shipment of medical supplies for children. At some point, they added a fifth member, Dorokoth, a being of similar genetic structure to Morkoroth.

The end of the Shadow Squad was revealed through records recovered from the Pirate Guilds, and through the testimony of Clopos.
The Squad terminated a pirate captain to get hold of his cargo, the crew of the ship mistaking Clopos for the ancient Glyan god "Orbus". As such, they would not let him leave the ship. The government who had funded the original cargo purchase tracked down the pirate ship at this time and attacked, throwing the Squad into the middle of the battle. During the battle, Clopos was taken with the crew of the ship who fought certain death without fear, and became their captain.

Morkoroth pushed the other Squad members into taking another job, although they were shaken up by the loss of Clopos. In what was supposed to be a hit-and-run raid to steal a Sincroid matrix found on planet Metran, the Squad ran afoul of Hell Pheyden and the Metran Corps. During the ensuing battle, Dorokoth was killed by the Metrans.

The Squad was dormant for some time, or their exploits were not worthy enough to gain notice. With a huge bounty on each member, where could they hide?
The Squad showed up again in a major way, blowing up a number of landmarks on planet Metran, culminating in the murder of an entire city-state. A new member was in their ranks, Nozaru: 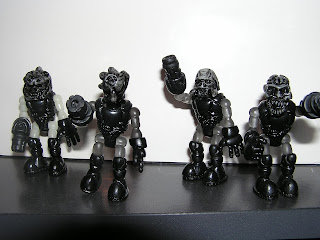 The Supreme Leader of planet Metran decided that enough was enough. He called out to his scientists and the greatest minds of the Metran Empire - something had to be done about the Shadow Squad.

Many methods were tried, but the eventual success came from the ancient Buildmaster: 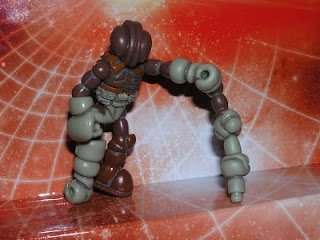 and his Build Corps.
The Build Corps would eventually trap the Squad on planet Stone, killing the Squad. Morkoroth swore revenge on the Buildmen and the Buildmaster, but Hammerdead killed him with MegaBuildLaser shot.

The bodies rotted over time, until a being known as Callgrim came looking for meat for his Grim Squad. With a very specialized form of radiation, Callgrim regenerated the flesh of the Shadow Squad and made them his slaves...the Grim Shadows. 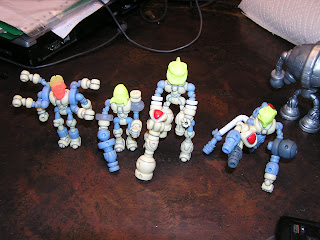 There were issues with this approach - Beholder was a mess of circuitry and random parts, while Manticore's existence depended on Phase Arm technology. Every Grim Shadow was dependent on the Buildman technology which comprised their bodies.
The Grim Shadows were a feared addition to the Grim Squad. Morkoroth was a dangerous soldier when controlled.
However, on one mission for Callgrim, they were interrupted in their given task by a being of immense power and strength: 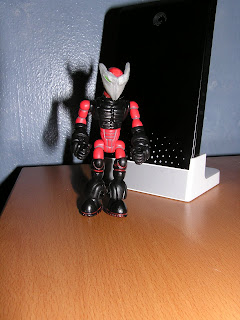 This being learned that the way to kill a Grim Shadow was to take their heads - so that is just what he did. Through a hard fought battle, their heads were removed and the bodies destroyed; the being could have destroyed them forever, but through a series of unexpected events, he was removed from the planet before being able to do so.
The Grim Shadows went off-line, their flesh parts not able to sustain power without the Build-bodies. Morkoroth cured the Buildman again before he faded out.

But then his mind was active again - the Squad was alive, in mostly flesh bodies, confronted by three new beings who called this collective of eight "the Supreme"...but that is a story for another day...

But today, we look at Nozaru in his Supreme form: 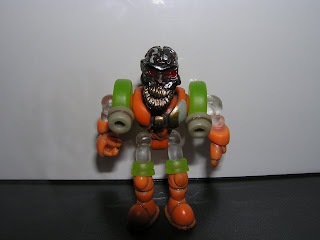 The being known as Nozaru is actually the flesh distillation of another Glyan god, NOISARU - the Simian Trickster. Noisaru wished to know the ways of his followers, so in a bet with another god, he gave up his godhood to become flesh and blood. But the other god did this to trick Noisaru and usurp his power. As such, Nozaru was born in the Glyos universe to a creature of similar genetic makeup to himself, without any memory or powers from his former life of a god.

From the earliest age, Nozaru found that he was prone to violence. Time was spent in jails and exiled from different planets. Over the years, he found that he had incredible strength and endurance, which made him a great creature to have in hand-to-hand combat.
The Shadow Squad tracked him down after hearing his superb psychopathic reputation. Nozaru accepted their offer of membership, as he wanted to find similar beings to share the violence with.

The representation of Nozaru above is his Supreme configuration. Through means yet to be fully explained to him, a combination of alchemical means and a special healing clay have returned him to physical life. 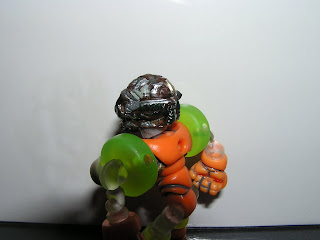 Green Phase tech augments his already considerable strength, with an underlaying Phase suit giving his limbs additional velocity during battle.
He has coated his teeth with Eidrallim golden, meaning he can bite through nearly anything.
Although he may not look it, Nozaru has a keen mind and should always be watched carefully in combat. The best method of attacking him is with ranged weapons - close quarters combat against him is near-certain death.
Posted by John K. at 11:00 PM No comments: