December already? Time for a monster! 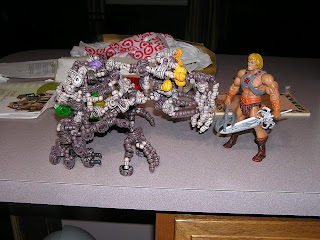 Monstrous, in his final configuration, shown with a larger known figure for scale.
Redesigned the feet and mouth and the back section to make it more enclosed. Finally happy with it.
Posted by John K. at 10:26 PM No comments: 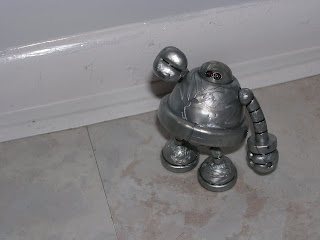 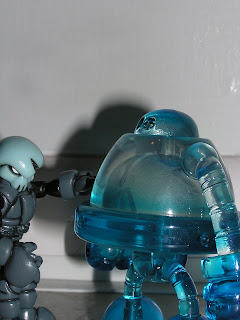 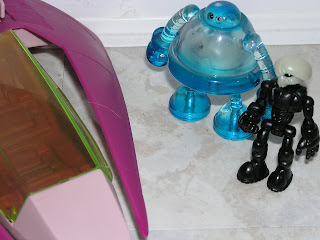 And now for a preview. 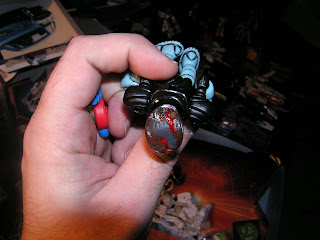 Picture of a custom I am working on with a fully-painted head. More to come.
Posted by John K. at 4:37 PM 1 comment:

A current shelf pic, with a new Eidrallim busting through the pic, like he is the Sensational Character Find of November 2009. 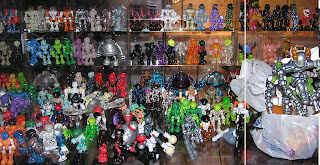 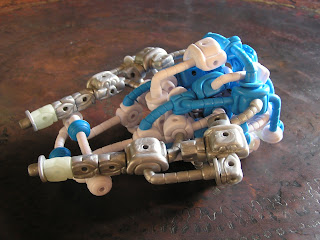 All beanbots, gentlemen (and woman). 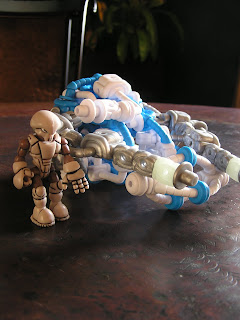 Skull Pheyden and his new ride, the Viper V. 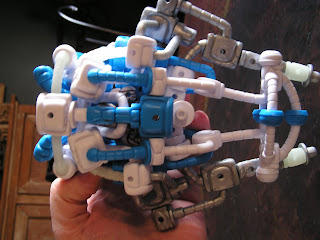 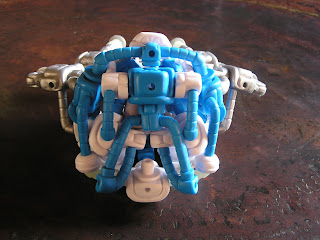 Hours of fun to build, you can actually store a Pheyden in the cockpit!

Anyone else out there building vehicles? Send some pics!
Posted by John K. at 10:11 PM No comments:

There has been some discussion recently on the forums about larger creatures and kits for Glyos - here are some reasons why you won't see it any time soon. 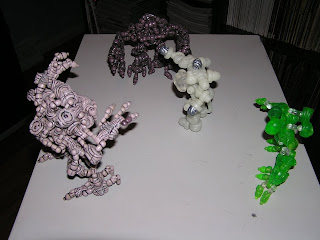 I was putting together a basic photostory for something I was thinking about - the Biotron analouge I created (in all glow, due to lack of parts in the correct colors) versus the standard and Shadow Villser, and the BioClone! 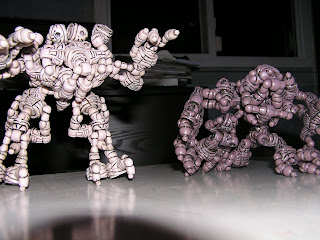 Look at these guys. They require upwards of 15 torsos to create (some as many as 30 torsos). So it would be costly to sell a set of these, because Onell can't just separate out out the torsos to sell you. 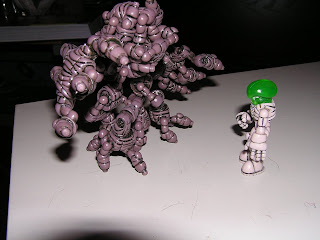 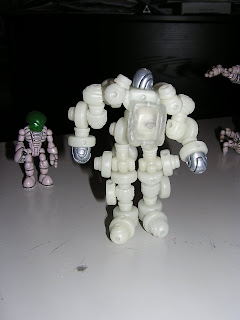 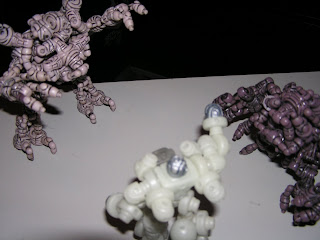 The battle is on! Since the corrupting touch of the Villser does not work on non-biological material, Glow-B.Tron battles them until the end! 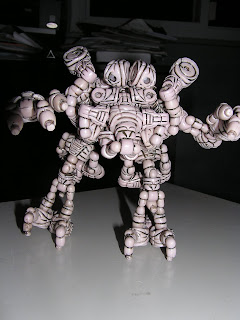 A close-up of the Villser.
If you need help with the instructions to build one of these, let me know! And if someone wants to do Lego-style instructions, get in touch.
Posted by John K. at 9:52 PM 2 comments: 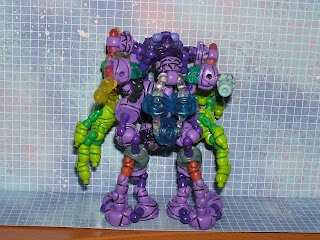 Over on the forums this week, Reflex Suits were mentioned again. Here is one I built, that was dictated by the colors I had available at the time. 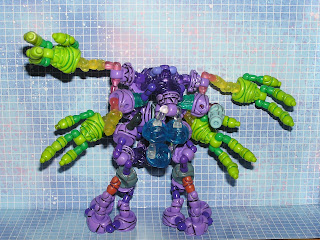 The construction of a Reflex Suit is pretty basic but requires a number of figures, depending on how you want to build it.
The four-armed variant requires at least two additional figures. 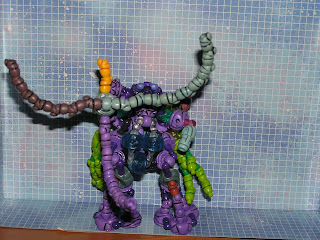 And here it displays a mega-weapon: the Fanblade Cutter. It spins and creates a vortex of wind that draws in adversaries to be cut to bits. This suit was designed in my storyline by Nebula Pheyden before he completed the Androbos suit. 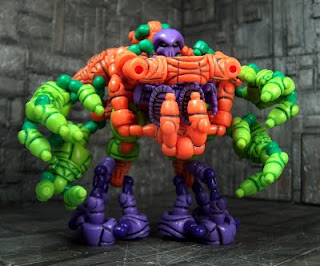 If anyone else out there has made a reflex suit, post them on the forum!
Posted by John K. at 9:55 PM No comments:

A taste of the future or a peer into the past? 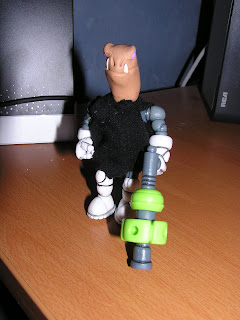 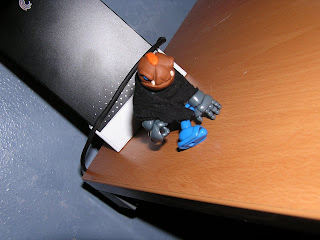 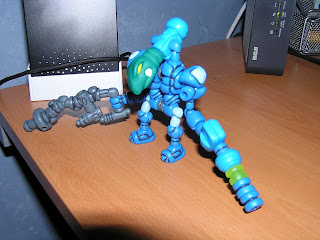 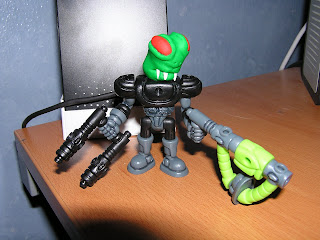 Be sure to visit Bah'Glenn Creations to read the continuing adventures of the Alien Mercs.
Posted by John K. at 9:48 PM No comments: 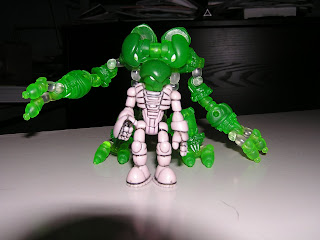 BioPheyden always lives under the threat of being transformed once more into the BioClone. 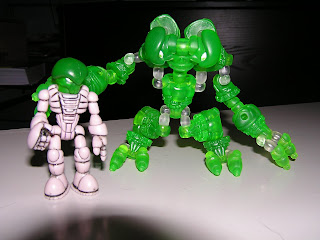 He can feel the mutation, caused by the touch of the Villser, surging through his limbs. He must keep it under control...
Posted by John K. at 9:43 PM No comments: 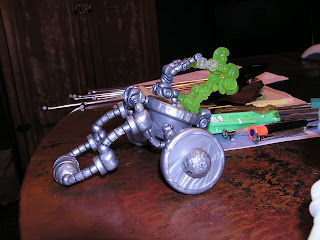 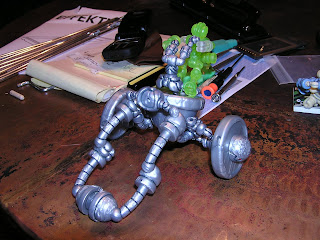 Been on a bit of a vehicle kick lately. This is a cycle made of Gobons and Infiltrator Buildmen.
Posted by John K. at 9:40 PM No comments: