The ultimate weapon of the Grathan Corps revealed...

The development of the Infiltrator Buildman delayed by the intervention of a hated Pheyden, the lead Granthan Sincroid takes a different approach to his engine of destruction. With the main chips from a third revision of the Infiltrator software and the raw materials of dozens of his potential soldiers, the Granthan has his workforce assemble a towering monstrosity to subjugate planets with shock and awe...the I2. 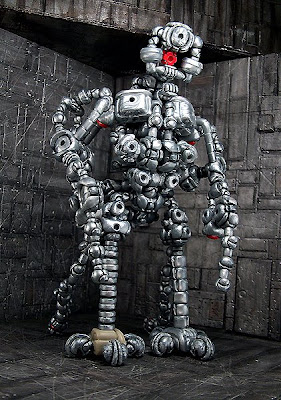 Covered in Eidrallim armor, the I2 walks across landscapes, destroying everything in the path of its cycloptic eye with double-punch cannons. 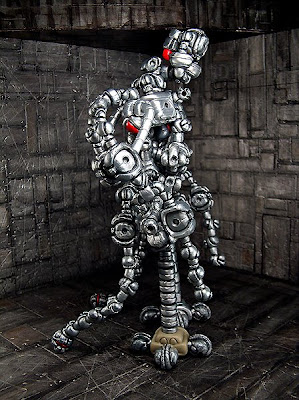 The I2 is held upright by a unique stabilizing system. The front legs are decoys - rigid structures that are to draw the attention of an attacking enemy. The true support for this machine lay in the back legs - gyroscopic pivots that allow the machine to move in a manner similar to a snake if the front legs are destroyed. The back legs can also be used as melee weapons, whipping around the I2 and smashing into opponents. 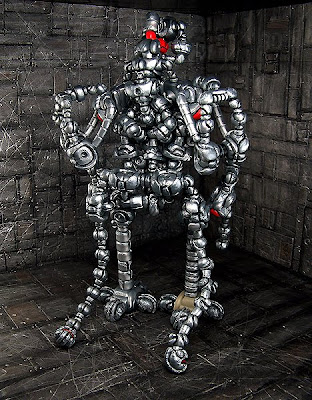 If the Granthan wants to have greater control over his machine, the back of the head contains rudimentary controls that a Sincroid can use to move the machine.

As yet, it has no known vulnerabilities.
Labels: custom Glyos granthan corps sincroids

Anonymous said…
GREAT GOOGILY MOOGILY!! O_O!! I like how it's SO gigantic that it actually is TALLER then the background set LoL. Awesome build dude.
July 28, 2009 at 9:03 AM