The seeds of the future lie buried in the past! OR You say you wanted an UPDATE?

Ah, the annual transforming robot festival known as Botcon is over, and only today do I feel like my prior self.
Botcon was held on the West Coast this year, so the three hour time difference and my propensity for not sleeping at night had a nice boomerang effect on my energy.

Botcon was pretty good this year. There was a nice exclusive set, a pic of which is below.
And a party at Paramount Studios on their backlot. Now, this was one of the few parts of Botcon that was actually better for not having much to do with Transformers. Standing on the backlot where so many movies have been filmed...there is a definite energy there that is hard to describe. In addition, Tyrese drove up Ratchet, Ironhide was there, Peter Cullen was there, Weird Al, Stan Bush played a concert...we got to see an exclusive clip from the new movie that was devastating.
Special thanks to my man Adam and his woman Scarlett - thanks so much for your hospitality.
Other shout-outs to Robby, Stu and his crew, the nice people I waited in the five-hour exclusive line with, George and Ayleen, Ciro, Derrick, Bill, Rik, and all the rest. (I'm bad with remembering names, so if you weren't specifically name-dropped, my apologies)

I only picked up a few things at the con: 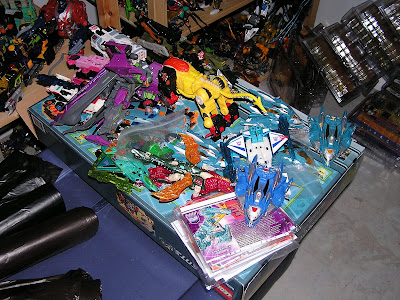 The Botcon set itself and the add-ons, with the absolute FINAL Beast Wars figure I was looking for, Drancron (for a good price, at that). Drancron is a funny one - the damn thing was sitting on a shelf in front of me - multiples of them - and I must have looked at it five times. Finally I asked the kind seller, since he had so many JP BW figures, do you have Drancron? He turned around and handed it right to me - I was relieved to finally find one, but also felt stupid for not seeing the two of them he had. 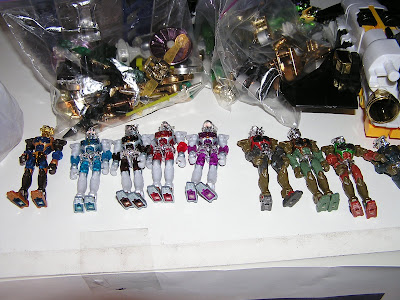 Okay, I got these during the trip, but not at the con. A bunch of Palisades Micros can be seen in the back, where they belong. Only two more Shining and one more Secret Breaster to go! 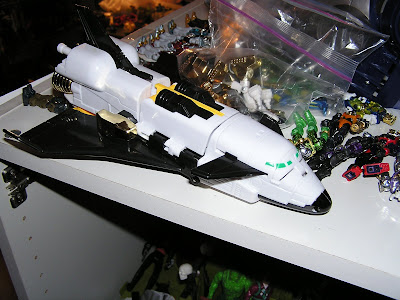 Knock-off Galaxy Shuttle! I've played with a real one at a local bros house, and sorry TF fans, he is not worth $300+. But this one was $20! Nice quality plastic too.
And AHHHHHHHHHHHH! The seller of this item had a bootleg 10 inch Toxie from Toxic Crusaders that he sold right as I was walking up. Much sadness. 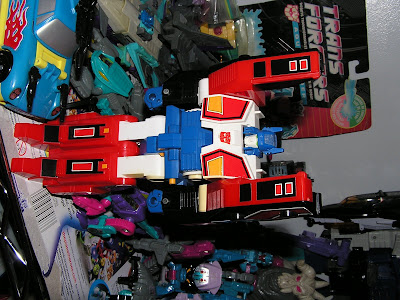 Roadfire, the last component of Big Powered. Unfortunately, I asked the jackass who sold me this if it was complete, and he said it was only missing the gun and the Micromaster (which would have been good enough for me), but it is also missing the entire front of the tank, which was removeable. Anyone out there have this part? Long shot, I know.

When I got back home, there were a few packages waiting for me, some of which do not require discussion because they are non-toy related. But of the toy related ones (and some general stuff I wanted to share/talk about): 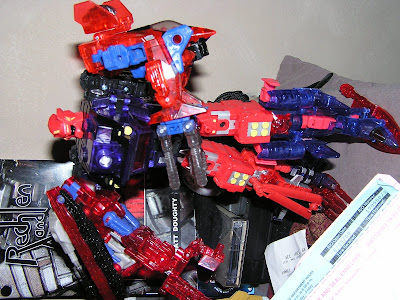 This is a really massive figure. I never had Energon Barricade, but Heatwave is pretty cool. This is Nexus Maximus, the figure from the Transformers Collector Club. Each limb was a free figure for signing up, so we have been waiting five years for this figure. Totally worth it, IMO. I love the colors, which I was a little lukewarm on at the start, but it really works for me. 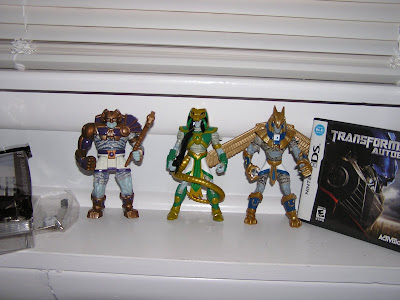 Not new, but something that was on my mind as I was taking pics - Mummies Alive! Anyone out there have a Nefertina to complete this set? How about a Pep or Presley? Any other second series? Contact me if you do. 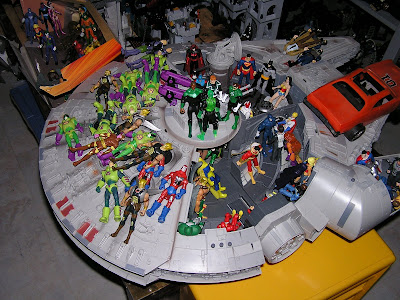 In my recent room reorganization brought on by a bunch of new Lego sets, I had to figure out somewhere to put the Infinite Heroes. So I looked at my empty Millenium Falcon, and one HMMMMM later, the problem was solved.

I will win one of those SDCC Anti-Monitors, I promise you. 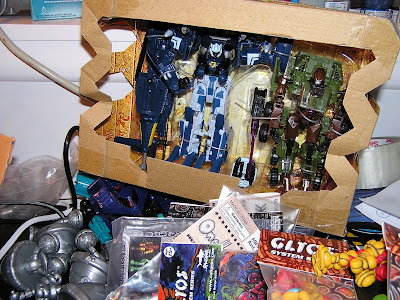 The TF movie is in full swing, and it is allowing them some leeway to put out stuff that they could not get made in the past. Enter repaints Whirl VS Bludgeon, two characters I was hoping would return. The Whirl does him a great amount of justice, and the Bludgeon is a nice placeholder until the ALL-NEW BLUDGEON comes out next spring (thank you Hasbro!). 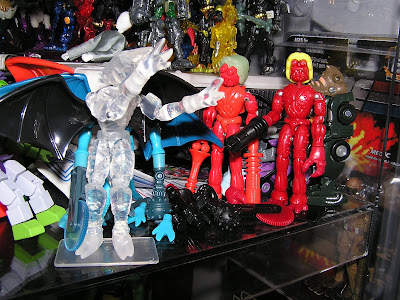 Micronauts - I bought a couple recently, from the Palisades collection. Adam also hooked me up with a bunch of them, so I have most of the ones I am looking for now. 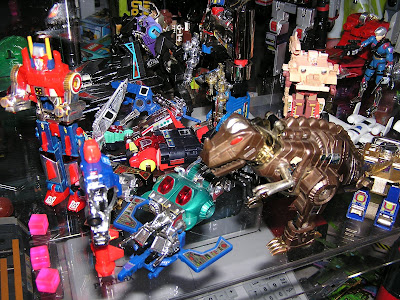 In the right of the picture, see a knock-off Grimlock with horn on face. Really happy I found this (a while back at a local show, but I forgot to take pics).
He fits in nicely with my pre-TF and unknown G1 figures from eHobby. 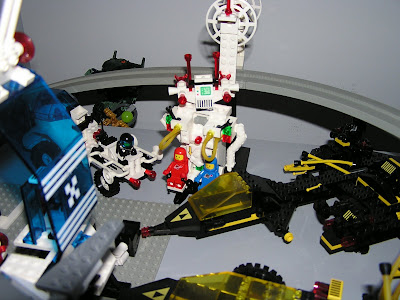 The final Classic Lego Space set I needed, Sonic Robot. Excitement level for set - low; excitement level of there being no more sets - high. Thoughts of completing all of the other Space series (about 20 more sets) - sadness. 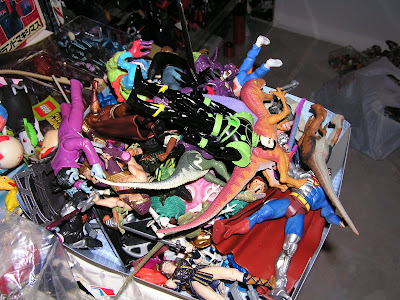 A left-over box of five and six-inch figures that haven't been shelved yet. How many can you ID? There are some toughies in here. 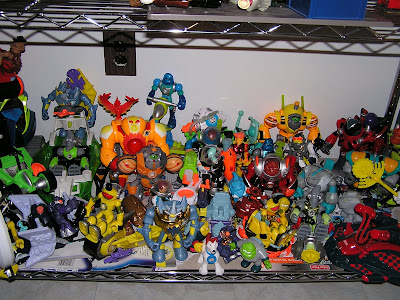 Just a random shot - finally completed my Planet Heroes, except the Base and the Voice Jet. I like these a lot - the asthetic is like the classic Colorform Aliens.

From my Glyos box of incredible destruction: 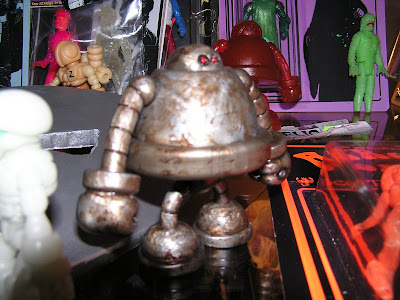 Rusty Gobon! He looks like he has seen better days. Residing on the Suck-shelf. 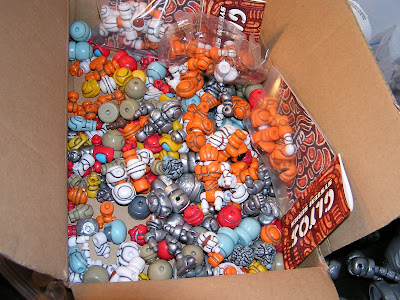 The aftermath of a few hours of building. My fingers still hurt. 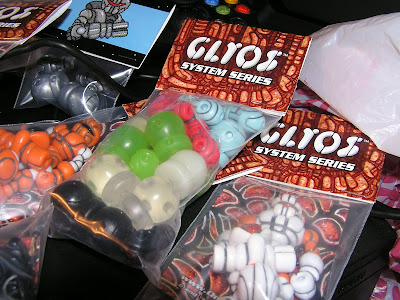 This pic kills me. Matt fit the whole Super Phase Arm pack into one little baggie. Love it. 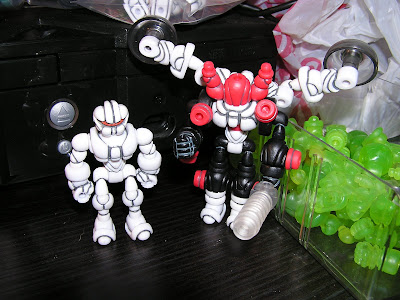 Yeah, I couldn't resist building one - Acroyear lives! And a white Buildman, who will have a special purpose going forward. 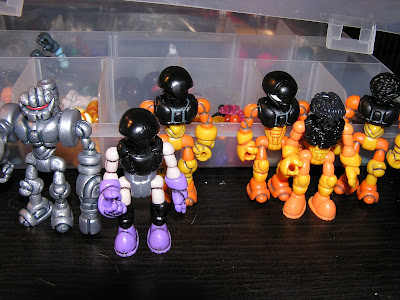 So, one of my two Custom Corps figures was Granthan Corps (second from right). With the left-overs of Buildman and some black heads, as is the design, I built another three members. I also see "Skywarp" as another Sincroid in this army, and their 2nd prototype Buildman, Infiltrator 2. DAMN YOU GLYOS 8-BIT GAME! 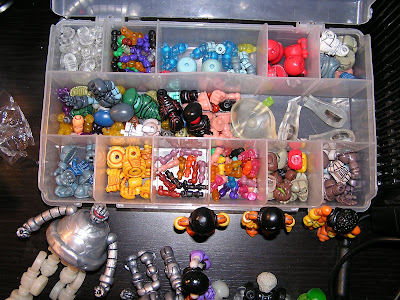 To answer Phil Reed's question from a while back, here is my storage bin. Going to need another one soon. 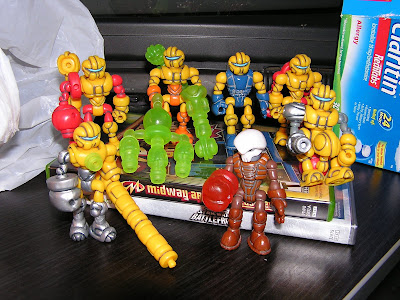 In a previous post, I mentioned that Metran had some partners in his defense of the planet. In addition to Hell Pheyden, he has a Corps of Special Buildmen that help him in his quest for justice.
Super-secret from this photo - I take Claritin. 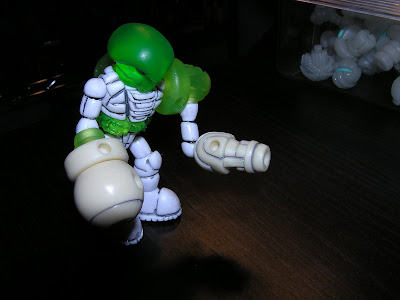 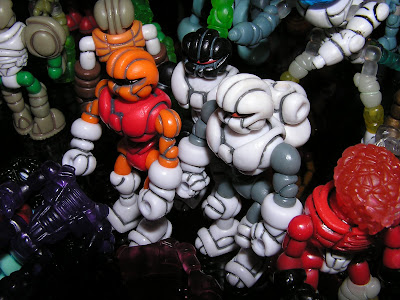 Some new Soldiers. I basically think of the helmet-head from the Buildman as a soldier helmet, most of the time. 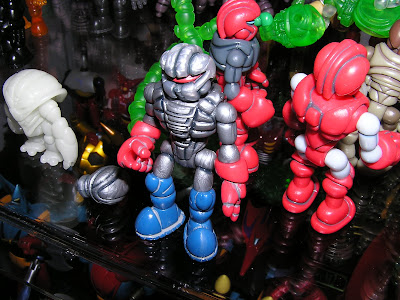 Inspired by someone on the Glyos forum - "Captain Adam". The silver worked out nicely, still debating which head to use, this or the Exellis. 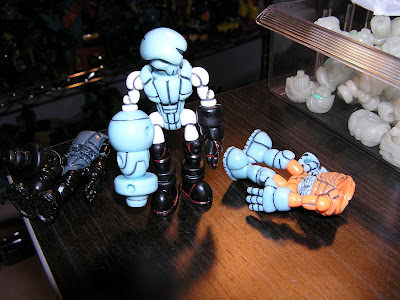 Evolution - the Doughty-style Scar Pheyden has upgraded himself with a new blaster and armor.
His old suits lay discarded to his sides... 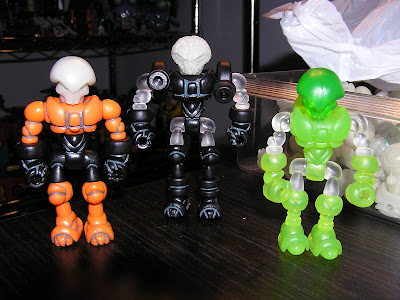 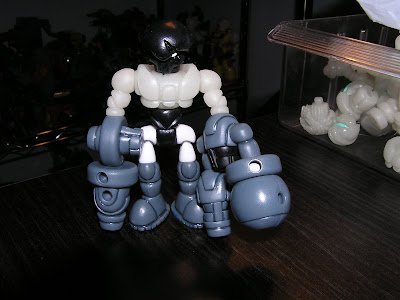 First appearance of a BLACK Scar Pheyden, with some prototype Phase weapons. 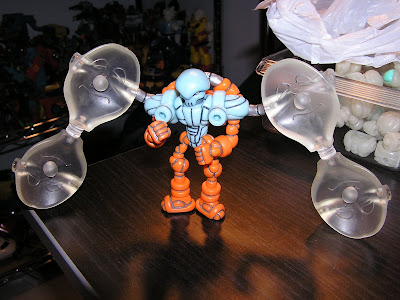 Evolution of my personal Pheyden. Free of the Exellis circuits that had been fused into his body, Pheyden obtains the L. Wings pack from a distant planet that allow him to fly through space without a ship. With a newly armored body and his memories restored, Pheyden moves off in search of new adventures. 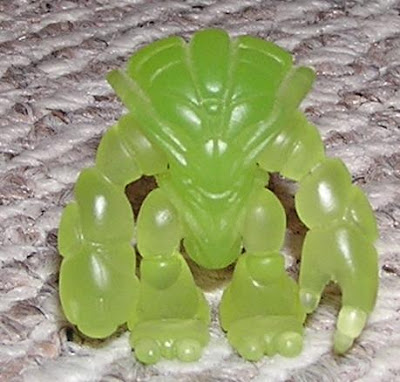 NOT coming soon. Explanation to come...in the future. 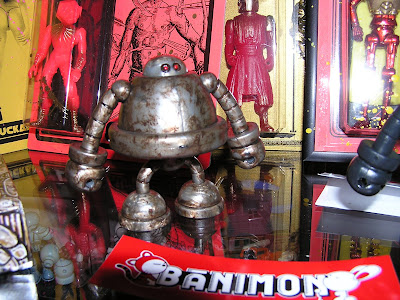 Another view of Rusty Gobon. 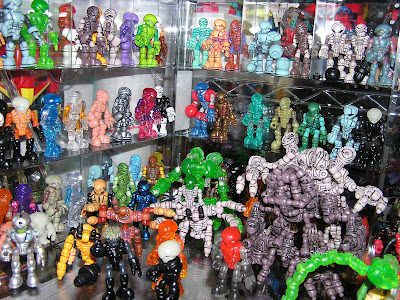 Final picture. With the advent of the new Buildman waves, etc, the first releases of Pheyden, Exellis, and the Crayboth have faded into the past, probably not to return. Here is a pic from my shelf of the entire vintage collection, blocked a bit by some of the other characters in the Glyos universe. Eventually, the cases in the back of the photo will be your quick visual reference to the official releases in the Glyos universe.

How is that for an update? See you in ten days with some pics that I think will be...interesting.
Posted by John K. at 1:32 PM

SOOO jealous of your Glyos collection...

Woo Hoo! Glyos photos galore!
Thanks for sharing so many
shots of your figures, parts,
and the storage bin.

All I can Say is WOW!! Thanks for the update and the shots.

Diggin' the Granthan Corps, and the display case is a nifty idea. Nice work!

Hey John! Holy Glyos what a wonderful bunch of toys to be waiting for you when you got home!

It was great meeting you at Botcon! We'll have to take you up on your offer to co-host Toy Break sometime - maybe next time we're out your way?

Thanks for the kind words, guys and gals.

Sure, I'll co-host ToyBreak anytime. You doing a show from SDCC? I'll do a run-in - or any time in my neck of the woods, for sure.

I am going to need new storage after this most recent round of Glyos. I told Matt - no more fifteen figure drops at once!

HAHAHAHAHA!!!! You got a knockoff Galaxy Shuttle! And roadfire?! NICE!