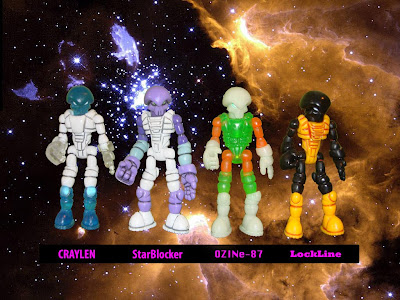 Resting on the Edge of Space, the Glyos system is full of adventure and wild characters!
- typical insane 80's style hyperbole from a non-existent Glyos commercial.
The Glyos system teems with life. For reasons unknown, the anomaly known as the Edge of Space has spawned a number of beings that are similar in look, if similar in no other way.
One of these beings is the man known as Starblocker.

Starblocker was raised on one of the planets on the furthest edge of the Edge of Space. His life was insignificant, save for the fact that he did not resemble his parents in any way. With his purple skin-tone, extra long limbs, and a look unlike any other being on his planet, Starblocker could have been ostracized quite easily; instead, he was one of the most well-liked beings in his area. Time passsed, and Starblocker aged. The planet was a mostly peaceful one, which made their fate all that much sadder...
One day, a strange grey and black being, twelve feet tall, landed on the planet under his own power without a spaceship, issuing a warning that the planet would be destroyed in six Glyan days. Starblocker's people were a serious race, so they quickly mechanized and attempted to destroy the being. But the being held control of untold galactic energies; he could destroy a spaceship with a thought. His hands rained nuclear fire on the denizens of Starblocker's world. It seemed that the threat of destruction would come true.

The most heroic military warrior on Starblocker's world, Captain SD-Frontia, took his ship and a crew of fifty to the next closest world, Tranzochan, in an attempt to secure help - but they found that there no longer was a planet where it should have been.
On their return to their own planet, the ship was attacked by the giant being. Overwhelmed with energies, the Captain destroyed his own ship as his crew escaped into the void of space. The being returned to Starblocker's world and destroyed it on the sixth day, as he had promised.

And what of Starblocker? Trapped in a basic space suit, there was not much time that he could survive out in space. He watched as the ship was destroyed, and the being departed. It is said that when a definitive death is before you, your mind opens in ways that it never has before. Starblocker thought of his parents, and how he had failed them. He thought of women, and holographic adventure representations, and how he had loved to eat the delicacies of his world and how he would never experience any of them again. His mind slowly slipped into unconciousness as his suit ran out of air...

The Sincroid asked Starblocker to tell him what had happened, and so Starblocker did. All the while, he saw the armored being watching him, felt that it related to how he looked. When the story was finished, the Sincroid pondered it. Eventually, it told Starblocker that they had received a distress call to come and pick him up after the destruction of the ship. Starblocker was curious about this - who had sent the call? The Sincroid said that it came directly from Starblocker himself.

Starblocker stayed with the Sincroid and his armored companion for three weeks. During that time, he was given an enhanced space suit with arm blasters and a space-to-oxygen conversion. The Sincroid gave him a small ship with space enough for five crew members and sent him into space; the Sincroid told Starblocker that they would not meet again, but that Starblocker had a specific duty to perform in the cosmos that he would know in the future.

Starblocker spent the next six years of his life exploring the Glyos system, solving problems and collecting information about the being who had destroyed his planet. If there was a way to destroy the being, Starblocker would find it.
It was during the sixth month of the sixth year that Starblocker received some information - a nearby planet had been visited by a strange being and told that it would be destroyed in six days. The planet was known as WVW-651 in the galactic database; Starblocker looked at the technology he had assembled, and zoomed towards the planet...