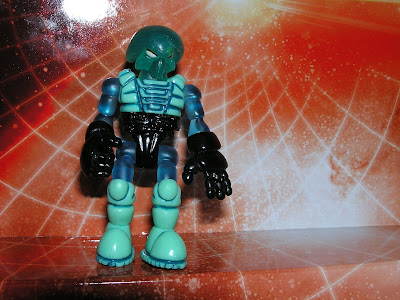 As there is only one Phanost, there is too only one Scar Pheyden in the Glyos universe. Due to the nature of time travel, he exists in many different forms simultaneously, able to meet himself through some quirk in space-time.

During one period of his life, Scar Pheyden moves from the deserts of Issaris to the deep seas of Quaticos, the underwater planet. During these adventures, he finds companionship with a race of undersea beings known as the ND'goa, and assists them in protecting their undersea city.
With biologicial modifications provided to him by Nebula Pheyden, Scar has gained the ability to breathe water.

It was unfortunate what happened when Exellis visited Quaticos during his search for modules...
Posted by John K. at 10:10 PM