Okay - so for those who don't know, a sister company to Onell Design has opened its doors - Rawshark Studios. Their flagship creation, Callgrim, is another character in the ever-expanding Glyos Universe. The blog for Callgrim and Rawshark can be found here.

At the recent New York Comic Con, the first Glyos releases from Rawshark were...released.
And what a pair. 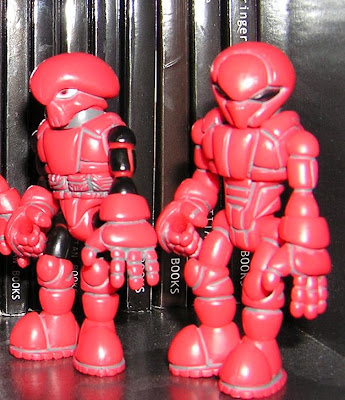 The figures released from Rawshark so far have had an additional bonus item included - an artwork card, depicting the characters.
From the artwork, we can see that Red Guardian Pheyden and Callgrim have some kind of relationship. Additionally, multiple Sentry Sarvos are prowling over a planet, being watched by Callgrim, which is the first official statement made about Sarvos; we don't know exactly what he/it is right now, but at least in the Sentry version, there are more than one of them.

Now, of course, I have my own spin to add to this. The Red Guardian and Callgrim are located in a part of the Glyos system distant from the Edge of Space. They are investigating a rash of Sarvos sightings, trying to track down Sarvos. But what they find is a completely different issue - someone has taken the population of a planet and robotized them, creating a mechanical army of Sentry Sarvos cyborgs.

Who would do such a thing? 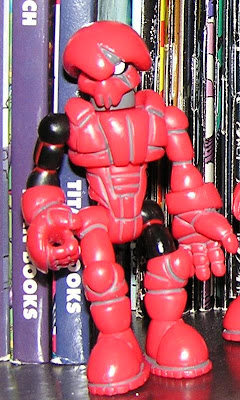 A red Scar Pheyden, assisted by...

Offender Phanost! But that goes against the nature of Phanost that we know of - why would he maim an entire planet? There is only one Phanost in all the known universes - could this be a new Phanost?

An unexpected "Friend of Pheyden" arrived to help find the answer... 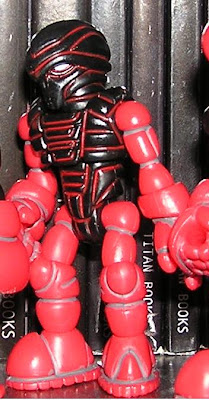 Black Hole Exellis! An Exellis from a universe completely separate from the Glyos universe (and populated by strange, talking animals), he has escaped the insanity of the alternate universe by upgrading himself to travel through black holes. Now, he works with Callgrim and Red Guardian to stop the machinations of Red Scar and Offender Phanost.

Red Guardian Pheyden and Sentry Sarvos are available at the time of this writing from the Rawshark webstore. The head and torso of Black Hole Exellis are available from Banimon.com webstore. At this time, the red Scar and red Phanost heads must remain a mystery...
Posted by John K. at 5:47 PM

Once again, the thing I love about these guys is just how open-ended the story is.

Seeing the cards and looking at the names, I'd guessed that the "Sentries" were actually RG's personal army, meant to help that Pheyden guard against some unknown threat -- a threat that, in the end, grew too large for them to handle, hence Callgrim's appearance.

GT - Damn! I wanted to jump over and buy more of the Apoc guys. Ah well. Glad to hear it worked out for them. Give me hope that a "Fans of Pheyden" exclusive would sell well, ha ha.

Roy - it comes up again and again - the non-story is a beautiful thing.
I could not overlook the Black Hole - as soon as red Phase Arms are available in bulk, I am tricking these bastards out. And I'll need some black ones too, for Star Sarvos...(Classified Sarvos with some swapped parts and Phase Arms).

I saw one fan comment over on Matt's blog that he saw Phanost as an Emperor. Another unique interpretation.

John, something that occurred to me since the "Custom Corps" dropped: since you already run the blog that, among other things, posts profiles of custom Glyos characters...

...why not start a unique "Custom Corps" section (since you already feature "custom" figures as-is), and get people to send in profiles (and pics) for their CC figures? It might make for an interesting diversion from the norm, and we'd get better looks at some of the CC figs. I was considering starting up a blog for the purpose, but since you've already got this one going, I didn't want to step on your toes or anything.

Once again, just a thought...

Sure! Anyone that wants to do a write up on their Custom Corps figure - or just send in a pic - is welcome to do so.