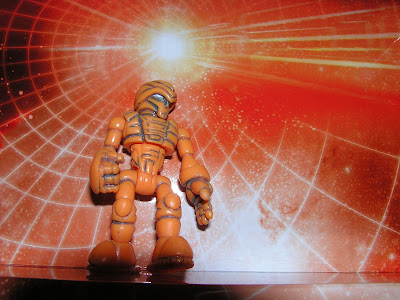 Another figure that people have been wondering about, Energy Exellis was never officially released by Onell Design.

The torso and waist were made available on the Andromeda Pheyden figure; the upper legs and upper arms were used on the Frontier Pheyden; to date, the head, hands, lower legs, and feet have not shown up on any official releases.

Energy Exellis, in my universe, is a power contained in a foot module. Exellis gains the ability to give off energy charges to machinery with this module, without draining his own power. During one adventure, the Energy module was used by Exellis to stop a ship that had lost power from crashing into a planet. It is one of the few times that Exellis can be considered to have done something heroic; however, his reason for saving the planet was more sinister. It was one of the last known residences of a Sincroid known only as "the Bishop", who was rumored to have been one of the first five Sincroids brought online. Otherwise, Planet WVW-651 would have perished.
Posted by John K. at 10:41 PM

oh ok thanks man i understand now :D ill get started working on it soon