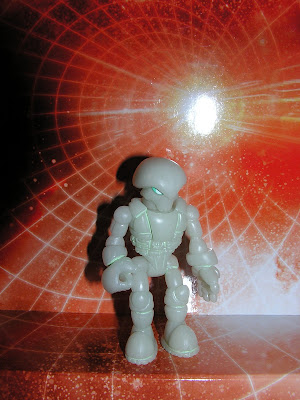 So, there are two tales to tell about this guy.

No, he was never officially released by Onell Design, although a few have slipped out there.
His entire body is made out of glow parts.
To date, the only parts from this figure that have appeared on an official Onell release are the head, hands, lower legs, and feet, which were used on Andromeda Pheyden.
Perhaps the other parts will pop up someday...

In my take on the Glyos universe, he is a silent ghost that appears to Cosmic Wave Pheyden. The continued visits from this spectral Pheyden have cracked the mind of Cosmic Wave, making him seem flaky in conversation.
Who is this spectre? And why is he following CW? Is he related to Phantasm Pheyden? Only time will tell...
Posted by John K. at 10:32 PM

How did you get the Spectre Pheyden ?
I refer to mine as the SkyDeviler Pheyden

I have two of them. One I made into my custom Phantasm Pheyden, the other was still sealed in the shipper baggie, so I am not sure where that one came from.
I checked with Onell, the official name is Phantasm Pheyden - but that is the beauty of the line. Every figure can be anything.