They say that the eyes are the window to the soul. 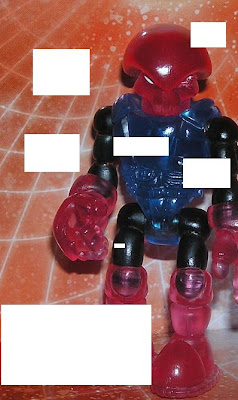 Trance Pheyden would argue that point with you.

The majority of Pheyden are dedicated to preserving time and space. Trance Pheyden merely exists.
He wanders space aimlessly, going where his mind tells him to go.
He emits a low-level sonic pulse that makes most beings ignore his presence.
He does not speak. He will not speak when spoken to.
If attacked, he will repel his attacker with sound - ear-shattering sound which can permanently deafen an opponent. Even KILL.
When threatened beyond a point where his sound is ineffective, Trance will begin to emit a light show which has, in the past, disoriented man, machine, and beast. Trance does not enter into combat in those situations, but merely leaves as soon as he is able.
There is one warning - if you should come across Trance, do not stare into his left eye-socket. There is no eye in the socket - it is like looking into the abyss, a swirl of white energy that takes the form of...well, no one knows. Their minds have not been able to process whatever lay inside the head of Trance Pheyden. So beware him. Stay clear.
Posted by John K. at 9:57 PM