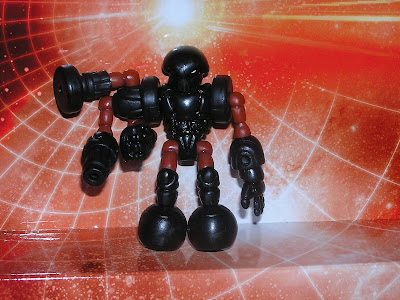 Although I am featuring this character now, he was a design that I happened upon much later in my customizing...mostly due to the Gear's Edge limbs that he uses. They are one of the harder pieces to get in Glyos-land...

I see this Pheyden, or "Haxx" as he was called in better days, as a failure at being protector of Time and Space. He has gone through an adventure where his arms and legs were badly damaged. A world that he was tasked to save was destroyed by a threat to the universe, like every other threat that he had faced over years of adventuring. The Buildmen that he used as companions attempted to rebuild him, using Gendrone Blasters and Phase Arms, and they were somewhat successful in fixing his body. The repairs that they could not make were to Haxx's mind.
He stays in exile, valuing his solitude. At times, he is spurred on by...memory? feelings? to intercede in the lives of the beings on the planet...those who have seen him describe a mirage, like something "comign through the desert sun".
If he had a special ability, it is not something that has been witnessed by any living being.
He now prefers to solve problems with the multiple blasters and strength upgrades granted him by Glyosian technology.
Posted by John K. at 8:48 PM