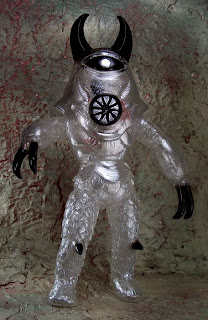 UPDATE: figure has been designated as C001 - for Crossover. Any item released in conjunction with the Glyos system but primarily branded through another company will be designated as a crossover.

So...what do I know about this thing? Sky Deviler is an alien. This version is filled with nice GITD Crayboth figures. So I assume it has been infected by Crayboth babies somehow, and will explode in a terrible ALIEN-style death when their gestation period is completed.
I should have bought one - I had a chance at one, I think, but missed out. But I will live. I can always customize one out of a shampoo bottle and a vintage 24-inch Shogun Warrior.
Posted by John K. at 10:11 PM