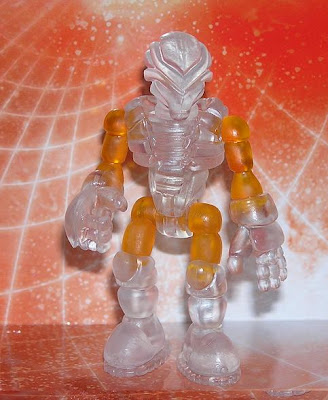 The Cyber Ghost module was not developed to be connected to a Sincroid; it was an upgrade module to allow Sarvonic Gendrones to interface with computer networks and become 'virtual avatars' in the real world. The module was never completely finished.
When Exellis learned of the module, he claimed its power for himself, but it did not work as it had been developed. When connected to a Sincroid data matrix, the CG module converts Exellis into a living computer program, allowing him to jump into a computer and dupe its programming. However, it also allows the possibility for his destruction, as the effect of activating the module turns him into a transparent version of himself that is subject to destruction by electrical disruption. Exellis lost a hand when attempting to take over the master databank on planet Metran with the CG module, when he crossed through an electrical arc that was protecting the generators.
As such, Exellis does not use this module unless it is absolutely necessary.
In the transparent mode, he exists as pure electrical energy, which can be disrupted by any force strong enough to do so. He can exist in this form for approximately ten minutes; after that time, he converts back to a solid-state form unless he has entered a computer.
Posted by John K. at 9:56 PM