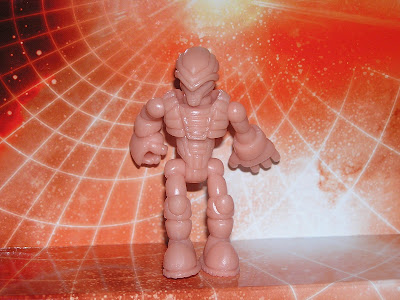 It was a harrowing adventure - nearly drained of power, Exellis and a gang of bounty hunters tasked with bringing back his head, functional or destroyed, were trapped on a ship tumbling into a sun. Exellis locked the last of the mercenaries in a locker and blasted him out into space, watching the metal box fall and dissipate in the heat of the sun.
In the spilled contents that had been in the box, Exellis noticed a thigh module for a Sincroid. It was an eye-catching pink color, that pulsed with life. Exellis grabbed the module, and it self-activated when he touched it.

Exellis' mind was connected with the kingdom of the beasts; not that there is a specific place with that name, but his mind felt a connection with all sorts of animal life. One was very close, a thing made of plasma that flew in the corona of the sun without damage. Exellis called to it - and the creature came to him, meeting at an airlock and successfully rescuing Exellis before the ship was destroyed in the sun.

Solaris Exellis mode allows Exellis to project an aura that seems as if he is glowing pink. This aura allows him to control animals within a radius of fifty feet. It can only be switched to once in a twenty-four hour period. It also allows him to mentally communicate with any animal life, no matter what their intelligence level.

Solaris Exellis is still available in the Onell Design webstore as of this writing. And yes, it really does glow in the dark. Pink.
Posted by John K. at 8:48 PM