One thing that has come to pass with the Glyos figures and their universe is the ability to customize them to your liking.
Unfortunately, the main man himself likes to make customs so good, you wish you had them in your collection! This Scar Pheyden was one of those... 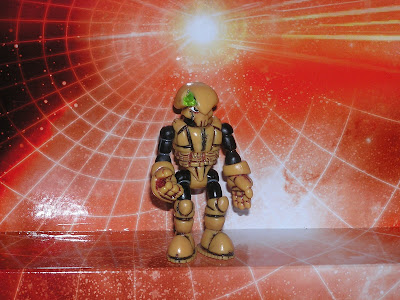 Scar Pheyden was a particularly rough and tumble character, as was evidenced by his massive battle-damaged head and armor. The new "split" chest plate is finally available with the Standard Phanost figure, but wayy back then, a custom version was done and used for the Scar Pheyden figure.
When I asked Matt how he made it, he revealed a few customizing secrets to me. Up until that point, I had merely swapped parts around and made my own color combinations. But now, I would use deadly tools to try and match what I had seen on his blog... 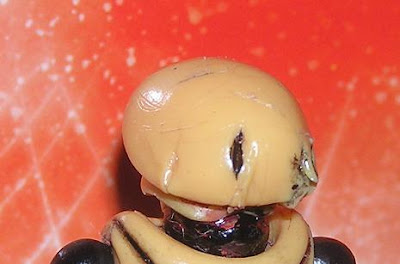 WARNING! Using rotary tools is dangerous! Use utmost care while carving with rotary tools. Do not attempt to customize while drunk. Keep blades away from hands; wear safety glasses when using tools.

With that said, I wanted to make a version of the first Pheyden known as Scar.
To make this Pheyden, you need a Gear's Edge version of Pheyden, which surely has escaped out into the market more with the advent of the Onell "junk figure" offer.
I cut the chest plate in two, giving it the required look. Next, I took a screwdriver and box cutter to Pheyden's head, as evidenced by the two pictures.
Since I didn't want to copy Matt's design exactly - this is intended to be that same Pheyden, with a couple more years under his belt - I added more damage to the back of his head...and also carved out a large chunk on the front of Pheyden's head. With a transparent green piece cut from a Phase Pheyden belt to act as a scab, my Scar Pheyden was complete.

I created this figure so early on in my customizing career that he is a bit of mess compared to some of the work I have done since, but I would not change a thing. It is important to me to be able to see how far I have progressed; I keep this Pheyden in a proud place in my display as the first custom I made that I could have seriously hurt myself doing.
Posted by John K. at 8:31 PM