So I put up my post about my fun at NYCC the other day and forgot the pics! 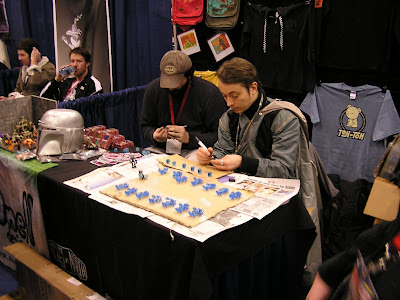 The masters at work - Onell VS Suckadelic - FIGHT!
Is the wave of the future truly one where there are only a few mass-market toy manufacturers and the rest are limited runs where you can get what you truly want? Something to think about... 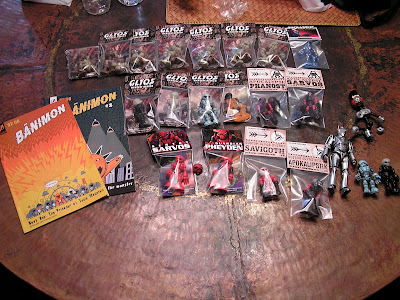 The haul! Banimon comics (Boris, we are going to have to talk more at the next con so I can figure out what the hell these books are all about); A Buildman Phalanx and one additional Buildman, The Sucklord Glyos edition figure, the two new Phanost and Sarvos from Onell, the Rawshark exclusive versions of Pheyden and Sarvos, the four Rocket North exclusives, a Beanbot, two special Pheydens, and the sole non-Glyos figure I bought, a gun-arm Cyberman.
The rest of my haul is in my guts - Australian meat pies (which I plan to have every time I go to NY), Krif Dogs, the awesome pizza we had at the pizza place, and a bit of alcohol.

These next pics aren't from NYCC - but they are something I have been teasing for a long time: 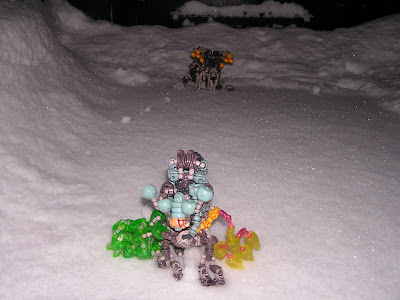 It is the final battle. Pheyden has merged himself, using techniques shown to him by Govurom, with:
the Bio-Clone
a Shadow Villser
Exellis Prime
Plasma Pheyden
and Govurom himself (along with a cache of Phase weapons) to create VILLEYDEN.
Monstrous is approaching the Great Gate where Time is Frozen. The Gate has never been breached fully - it is unknown what lay beyond, outside of energy...unknown to all but Pheyden. 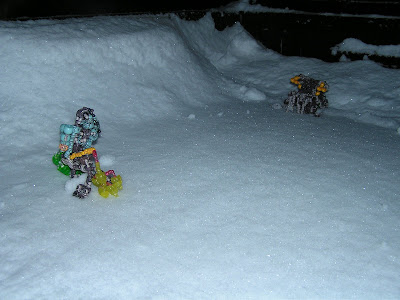 Monstrous turns after Villeyden unleashes a massive plasma blast which passes through the energy-dampening field of Monstrous and scorches his back. The eight eyes of Monstrous watch this new creature as Monstrous feels the energy radiating from it. The Gate can wait - this being must be consumed...

I'll take some really good "hero" pics soon of these guys so you can see all the details of the bodies. It took many days to create them - their scale is probably not best showed off in these pics. Note to aspiring pic-takers: shooting pics in a snowy truck bed at 5 am is hard to do.
Posted by John K. at 6:15 PM

Couldn't help but chuckle at the "Villeyden v. Monstrous" pics; there's something about seeing the Glyos figs in a typical "final battle in snow" setting that just . . . nostalgia overload? I dunno.

Anyway, nice haul (is that a red Phanost head and glow Scar head I see?), and it was cool to put a face to the name. Can't wait to see what else you've got to show us...

Can you imagine if Hoth had been the end of ROTJ, with Vader and Luke fighting in the snow?
Yeah, me either. But the snow battleground is a classic one. I was thinking of Kill Bill, honestly.