This is one of my favorite custom color Pheydens. 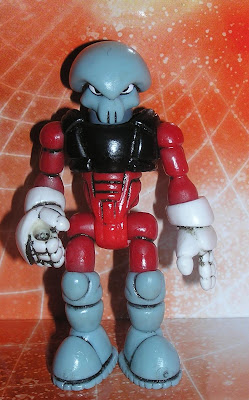 This is the original Pheyden - not necessarily the FIRST Pheyden, but the first one that we meet in the Glyos system.
He has had many adventures. In what seemed like a relatively minor adventure, Pheyden cleared up a problem that a scientific compound was having with some Eidrallim that had been illegally smuggled onto a planet. This was an all-too common occurrence in the Glyos system - almost as if someone was playing a giant practical joke across the galaxy.
Pheyden had cleaned up the mess and restored the balance, when he found a strange artifact.
The artifact led him across the planet, to an underground storage facility. A trap-laden storage facility.
Pheyden used all of his wits to get through the traps, and in the final room, he discovered a number of life-support machines, incubating a giant egg.
The machinery had been running for a number of years, it seemed, and Pheyden was going to leave it alone. But the machines reacted to another living being in their presence, and the egg hatched. Pheyden expected to find some fantastical monster, ready to eat him - an all too common occurrence on the Edge of Space. Instead, he found a suit.
With reluctance, he put the suit on - and found his limbs surging with power. He jumped up - and flew through miles of solid rock to the surface of the planet! Still his momentum did not stop - Pheyden continued through the atmosphere until he was off-planet. He found that he could walk through space as it it was solid ground - but he could also propel himself through it as if it were a liquid. An asteroid flew towards him - Pheyden punched it, smashing it into hundreds of pieces.
The suit was like becoming god. But it was then that his connection to the galaxy locked in again. A countdown was forming in his mind - the power of the suit would last for three minutes, no more, no less. Each minute of power heralded the ending of a sun somewhere in the universe.
Pheyden quickly put himself back on the planet and deactivated the suit. It did not allow him the chance to remove it, instead disappearing into an alternate space when he wished he could remove it.

Pheyden knows that he has the ultimate power to battle evil, but that it comes at a great cost.
He hopes that he will not have to ever use it, but knows that eventually, he will...
Posted by John K. at 10:05 PM