The most dangerous threat to the Glyos universe - part 2 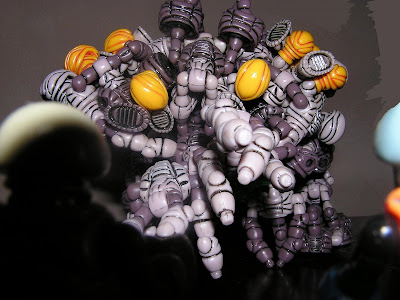 Pheyden and Ranic Pheyden stepped through the Great Doors of the temple on Trax Three, breathing hard. It was following them, and there would surely be no escape. Pheyden looked at Ranic with panic, which was unusual to see in a Pheyden. The Kromnet suit had done nothing. It could shatter a star, but this thing had shrugged off the blow and absorbed the energy as easily as an Aulder drank cosmic rain. Pheyden switched to his Tempest suit, watching as Monstrous drug its immense body through the temple gates. The eight eyes of the massive creature blinked as it stared down what it considered to be a tasty snack...

Please note: Monstrous has been painted specifically to look as if parts of it have been through the wear and tear of ripping through dimensions and feeding on the life energy of all the inhabitants. Thus, the "tar like" substance you can see on some of the limbs is intentional and does not reflect the intention or work of Onell Design. Thank you.
Posted by John K. at 9:08 PM