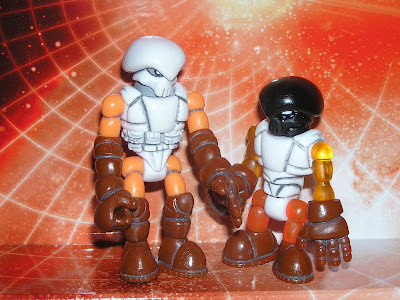 Ahh...Frontier Pheyden. The second Pheyden I ever bought. I'm going to take a second to catch up on the memories.

Okay. So Frontier Pheyden above is not shown in his official Onell Design. I modified him - which is one of the most beautiful parts of the design of these toys - by swapping out the original shoulder parts with the upper leg parts (to accomodate the larger gloves), and created longer gloves for him by adding parts from the lower legs to his arms.
In my view of the Frontier character, I saw him as a Pheyden with two alternate modes - a taller mode as shown on the left, and the more compact mode shown on the right.
Frontier was a Pheyden who woke up on a planet still stuck in the time before space travel. It would be most similar to the Earth-era Wild West, except for the proliferation of alien life forms.
He was originally the same height as all of the other Pheydens, but in a battle with another alien, he forever transformed into a taller version.
The smaller version, which is called "Runty" by the denizens of Frontier Town, is much stronger as a result of Pheyden's atoms compacting. His limbs become transparent, flashing with power as he moves.
Frontier Pheyden does not possess the ability to move through time and space as some of his other selves do; additionally, he does not possess any of their cosmic awareness. As far as he knows, he is the only Pheyden in the universe.

Frontier Pheyden is still available from Onell Design, although stock is very limited.
Posted by John K. at 10:18 PM