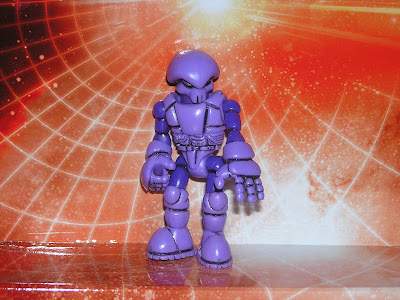 Nebula was once the same pale blue color as the main Pheyden of the Glyos system. But a freak accident while traveling through space and time pulled him into a nebula.
The energies of the nebula were turbulent and worked upon the Pheyden; slowly, he absorbed those energies and was transformed into the purple hue shown above.
A passing science ship found Nebula floating in space, his mind inactive.
But when the ship was attacked a renegade group of Sincroids looking for their lost leader, Nebula returned to consciousness and helped the scientists shut down the Sincroids.

Later, after he had learned all that he could from the science ship, Nebula befriended Rothan Pheyden in an adventure that nearly resulted in the destruction of five planets. Together they have continued on in a quest for knowledge, and a chance to help Rothan control his great anger.

Nebula Pheyden has an understanding of the universe that few others do due to his time in the nebula. At times, when his will is exerted, the bonds of molecular cohesion can be disrupted and and object will be scattered into its component atoms.
This is not a power than he can exhibit on command, but happens at times of great stress.
Nebula is also the inventor and pilot of the Androbos Reflex Suit, a multi-limbed mech that allows the user to complete many tasks at once.


Nebula Pheyden is still available from Onell Design - but stock is low, so be wary of waiting to place your order.
Posted by John K. at 9:20 PM