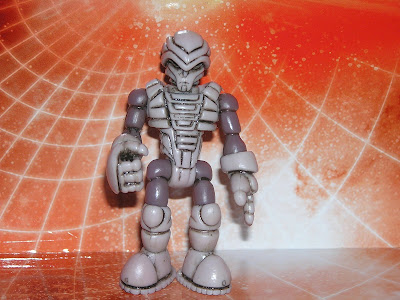 One of the more powerful modules changes Exellis into a Reverse version of himself. The module is contained in a Sincroid foot.
The Reverse Module gives Exellis power over time and space to reverse time around him up to ten minutes.
The module requires a month to recharge.

Later, after Exellis is split into multiple versions of himself by Redlaw, ESREVER is confronted by the mysterious entity known as Sarvos. A battle ensues...in the end, there is only Sarvos, clad in the same colors that RE once was.

Reverse Exellis V1 was never commercially available for sale online. It was only available at a select number of conventions in 2008. Hence, it has been given an F designation on the checklist. Any figures that are released, or are in general, fun one-offs, will be featured on the checklist with the F### numbering.
However, due to demand for the figure, Onell Design has produced a version 2 of this figure, which also serves as the Standard Sarvos body.

Also, standard note - this figure has been customized with extra black "space tar" deco by myself, to emulate the wear and tear seen on droids in movies like Star Wars. (insert Artoo-Deeto noises here). No R2 - I am telling the complete truth. I can customize my toys any way I want...

(gets out paint brush and Grand Maximus figure) Whistle, whistle....
Posted by John K. at 8:54 PM