Comics you should be reading - Hack/Slash

Frequently, I overhear in my local comic stores that people want something different. That they are tired of Wolverine. That they want something that isn't just superheroes done the Marvel/DC way. But what I always see people buying is the hot DC crossover, or the $5 Marvel Comic with 12 pages of story.

If you want something really different, and if you are in tune with the horror genre, as I am, then there is a comic you need to be checking out on a monthly basis: Hack/Slash.

(think of the 1980's horror movie promotion voice)
This...is Cassie Hack.
She doesn't fit in at school.
Her mother works in the school cafeteria.
Boys would rather kick her - than kiss her.
But when the other children start disappearing,
she may be the only one who can stop...the Lunch Lady.
(end promo) 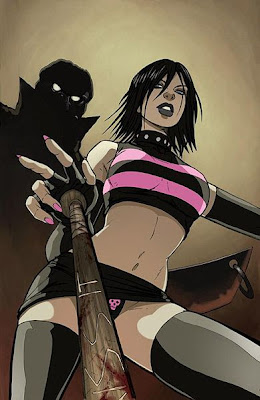 Cassie, Vlad, and weapon
Hack/Slash is the story of Cassandra Hack, your typical outcast at school who is heading for a life that would make Carrie look like Miss America. But where Carrie's mom was single, crazy and no help to her, Cassies' mom is single, a master chef in the school cafeteria, and a PSYCHO.
Soon, children are missing, and mystery meat is the main course at school.
Cassie confronts her mother, but before the situation can be resolved, the police burst in on them. Betrayed, Cassie's mother commits suicide by drowning herself in a pot of soup.

Cassie goes on with her life, but kids start to disappear again. Mrs. Hack is back - now as an undead slasher* known as The Lunch Lady. Cassie survives another encounter with her mother, dispatching her in grand slasher film tradition.

In anger, Cassie vows to rid the world of slashers, and sets off into the world in search of slashers.
While searching for a butcher on the subway known as the Meatman, she mistakenly targets Vlad, a hulking, misshapen brute of a man with a kind soul, as the slasher. While fighting him, she realizes that he is not the killer, and after they take down the Meatman together, they forge a partnership to battle the slashers together.

In the span of 30+ issues, they have battled Chucky from the Child's Play franchise, Herbert West (a guy who re-animates dead bodiesm from a series that shall not be named for copyright reasons), and a host of other murdering madmen - and women.
Seriously, a book this good should be selling more than 5000 copies a month, when New Avengers is selling 150K issues per month.
So, the next time you are at your local comic shop, pick up a back issue of Hack/Slash - or better yet, plunk down $15 and get the first volume in trade form from the Devil's Due webstore. I know you'll enjoy it.

If anyone does try it out, please leave me a comment and let me know what you thought!


*slasher - a killer, usually back from the dead, who kills a specific subset of victims based on geographic location, age group, or some other qualifying attribute. Can usually take an inhuman amount of trauma, may be able to regenerate from wounds.