"Born into existence as a slave, the race memories of cosmic preservation lost through some random quirk of the Pheyden generation event, this Pheyden from the Rothan line was tortured for years in endless combat and training. Upon learning of his time and space warping abilities from a chance encounter with a inter-dimensional treasure hunter, he escaped his prisons and wiped out the entirety of the race that had held him prisoner for so long. He now travels from dimension to dimension, destroying all he considers evil.
Wearing armor forged from the bodies of DynaEdrallim over a prototype Phase-Suit, he is difficult to touch in battle - and even when a blow is landed, the hard-earned covering he wears protects him from most attacks.
Now known as Gladiator, he has come to the Glyos system in search of Exellis...and Ranic, for reasons known only to himself." 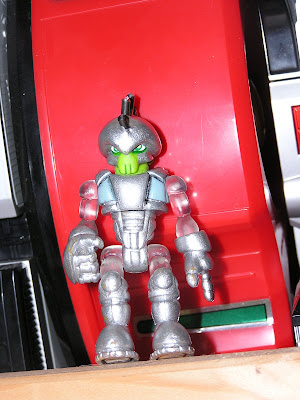 A lot of work went into the creation of this figure. It was my first modern experience with attempting a custom through paint (some early 90's attempts at modifying Batman figures as had been shown in Wizard Magazine never panned out).
The changes made involved scraping the dark green paint from the neck of the head, to give it the light green look you see. The silver parts of the figure are all painted - learned many lessons here about light coats, not painting directly onto the figure from the bottle of paint, etc.
Keeping the blue parts of the chest clear of silver paint was quite a task, but it came out well.
Finally, to complete the look of his helmet, I painted the protective "cheek flaps" onto his face, and put the spikes into his head to mirror the inspiration, the Gladiator helmet from the film Gladiator. They are made from real nails, and are quite sharp.

I had a lot of fun putting this figure together. When toy companies are not giving you what you want in a figure, make your own! But above all, be safe while doing it. Painting requires a good amount of ventilation. If working with tools, make sure you have the proper safety equipment.

If anyone else out there has a custom Glyos figure they would like to have showcased, drop me a line.
Posted by John K. at 1:07 PM