Teh Rare - stuff that I have or had at one point that you will never see pics of! First up - Toyshow Microman Demons

Alright - a lot of people have heard of Micronauts.

It was a big line the 70's. You would usually find a random chrome headed guy who might be transparent in a big lot of Star Wars figures...anyway, that was Micronauts. They were better articulated than Star Wars figures, with an insane amount of accessories and robotic interchangeable monstrosities.

Micronauts was actually a US creation, using varied toys from Takara's Microman line, a couple of Magnemo toys from another Takara line, and some unique US designs.
Microman was an even more extensive line in Japan, running for over a decade, spinning off what we would come to know in the US as Transformers.
As all good toylines do, eventually Microman and Micronauts took a break from their eternal battle, living on in the memories of a number of adults who had lived the war with them.

Around 1998-99, I was looking for Gi Joe figures and vehicles, in what I thought was a futile attempt to "collect 'em all". This was pre-eBay, people - and if you were a person who had an innate distrust of mail-order, local stores and conventions were the only way to get items.
So I had heard of a new store opening in the Philly area, which turned out to be a store I had visited once or twice in another location, the greatly-missed Quakerhead. The owner and operator, Ted who Took So Much of John's Money for Years in His Store, had even more toys in this new store than the old one did. 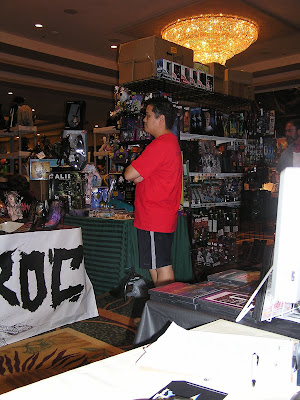 Not his store, but Ted in recent years.
Including tons of cherry Gi Joe items. I think I got my first MMS from him...the pickings were plentiful in those days. Imagine a world where regular people took their junk to a dedicated toy store to sell it, instead of direct auctioning to fellow fans for the highest price...(adding rant tag to this post - NOW!). Anyway, I would spend entire lunchtime hours at his store, and more after work, as it was pretty close to my office in those days.

One day, just looking through the volumes of the store, I came across this: 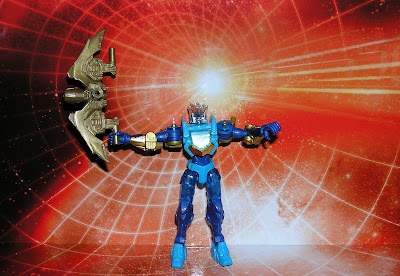 The writing was in a language I could not read, but the intention was clear - this was a new Micronaut of some kind! I spoke to Ted about it a little bit - this was the new Microman series, and it had been running for a little bit of time when this figure was released -
Fun Fact about Japanese toys - a number of series I have collected helpfully are numbered so you know when you have missed something from the main series. Ol' Walt here was number 41 in the series. For those that know me well, they know exactly what went through my mind at that moment of discovery - checkLIST!
Hands down, these Microman figures are some of the best action figures that have ever been created as far as durability, paint, detailing, articulation, and design.
Every figure has a magnetic feature of some kind, so you can make Microman walk up your fridge, or hang him underneath a metal shelf. In this particular series, the magnet has been transferred to his weapon, and also in his feet. The chest design is an homage to the classic Microman Command series, some of which were released in America as Pharoid.

One thing about Japanese toys, especially Takara of this time-frame - they loved exclusives. LOVED 'em. And that is the (main) subject of this post.
There was a toyshow over there, where they had FIVE exclusive figures, that were only given to dealers (!). This still amazes me to this day. Each piece was supposedly limited to 200 pieces each, or perhaps less - there is no real way to tell. But if you want the facts as we know them, check the links at the end of this post.
To my knowledge, only one collector has a full set of five, although much like Fight Club, there are some things you don't talk about.
At one point, I had three of them. And I took a picture of the event for posterity: 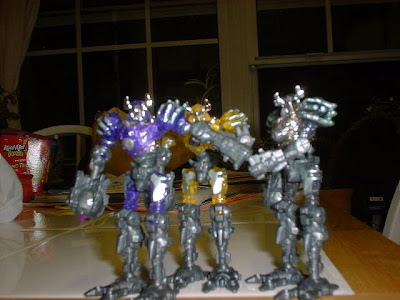 You've heard of the Unholy Two? Meet the Unholy...wait a sec.
Meet Demons Purple, Black, and Yellow. The other two in the set are Demon Pink and Demon Clear. Uncommonly rare - and one of the very few things that I have ever had that I wish I did not sell.
If anyone out there has any of the five except the black one for sale, drop me a line.

For Microman, go to Microforever. He knows everything about this era of Microman. And the original era. And the stuff since...yeah, just go here.
For Micronauts, visit Innerspace Online
And my buddy Bryan frequently posts about Microman and Nauts and other related lines on his blog, Rocket Tubes
Labels: Microman rant teh rare toys

rockettubes said…
Great story! Those Demon variants are amazing. I didn't collect many of the variant or exclusive-type figures from the 1999 series, but really wish I'd picked up some extras of the Demons, either the rarer ones or even just doubles. Maybe later...
December 5, 2008 at 12:46 PM

Tim said…
You actually owned a few of the exclusives Demons?!?!? That's insane! Just seeing the different picture of them beyond Microforever is amazing!
June 24, 2009 at 5:46 PM

John K. said…
Yeah, I had them. The guy who has them now has all five, supposedly. I would love to see a pic, but he is off the proverbial radar.