We're back today with two more entries in the Glyos system series from Onell Design.
From the initial release of six figures, this is Gear's Edge Pheyden and Phase Pheyden. 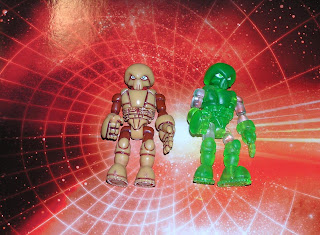 These two have nothing in common except a desire for a low-rent apartment in 1980's Boston....

Gear's Edge Pheyden is one of the toughest to get of all the Glyos figures. Something in the plastic that was used had an adverse effect on the neck joint, making it difficult to remove his head. And, in some rare instances, breakage of the head peg.
It is a real shame, as the real-type coloring on the GE Pheyden is one of the strongest yet made.
Character-wise, he is a loner. The world of Issaris, where the story of Gear's Edge takes place, is a world of endless deserts. During some great catastrophe, the humanoid beings of the planet left the world - leaving behind all of the mechanoids without shutting them off. Over the years, the mechanoids have developed their own society...this Pheyden is stranded on Issaris, his powers unaccessable. He continues to journey across the world, looking for a way to escape.

Phase Pheyden is a popular figure in the Glyos universe. He was the first clear figure to be released, and is said to have been a big seller.
My interpretation of his character is a simple one - he has the power to become intangible, which has defined his very personality since he discovered the ability. Phase always looks transparent, but this is not the case. He is very much solid until he wills himself to not be.
Phase avoids problems, as he can just drop through a floor to escape a rampaging Villser, or run through a wall to avoid a Sincroid army. He will soon find that there are some problems you can't run from...

The first Gear's Edge graphic novel can be obtained from the official Glyos store
Gear's Edge Pheyden is long sold out, but Phase Pheyden is still available for the low price of $8.
Labels: Glyos toys